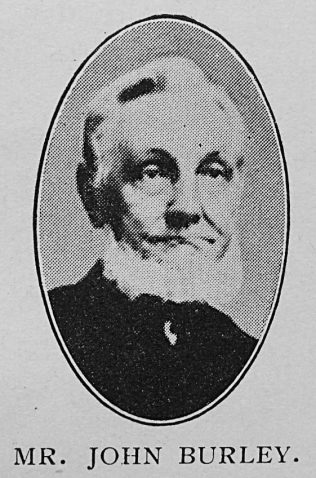 On August 23rd passed to coronation and reward a veteran lay preacher from the Leicester II. Circuit in his 87th year, John Burley, of Countesthorpe, was the oldest preacher on our station, and he reaches back to the beginning of our church at Countesthorpe. He was a lay preacher for over sixty. years. In the far past he was next on the plan to the famous Miss Buck. His father’s name was more than half-way up the plan in 1829. It is quite safe to say that the father and son cover a period of lay preachership of at least ninety years: that reaches very near the origin of our Church. Their lives and labours make a history of great distinction and value.

John Burley was distinguished and respected for his spirituality and devotion. A man of deep-rooted convictions and loyalty to principle, of clean life and high character, he compelled confidence and hearing. He could talk religion to men at the street corner and kneel down and pray with them, and they never resented it, because they believed in him; this he did in front of his own house. He believed in the mighty power of the Gospel and the presence of the Holy Spirit and expected conversions. God grant his like may never pass away.

He married Sarah Herbert, nee Collins (1824-1893) in the spring of 1861 in the Blaby Registration District, Leicestershire. Census returns identify one child.