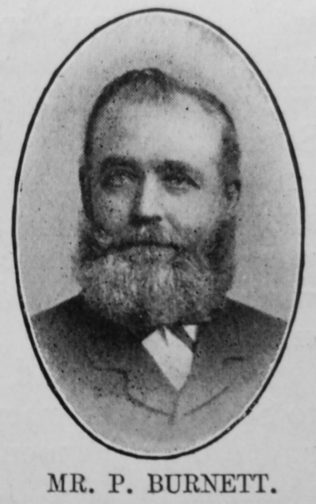 The Ravensthorpe Society, in the Dewsbury Circuit, has lost one of its oldest and most beloved members and officials by the death of Mr. P. Burnett. Our departed brother was born at Tranmere, near Ripon, Yorkshire, in 1838. A little over forty years ago he removed to Ravensthorpe. Immediately after a Primitive Methodist church was established in the village. He attended one of its services and was soundly converted to God.

He forthwith joined the Society, and became an earnest worker in the church and school. With much acceptance and success he filled the positions of Sunday School superintendent, class leader, trustee, and chapel steward. Mr. Burnett was a loyal Primitive Methodist and took an unflagging interest in our Connexional life and institutions. He deeply loved the house of God and the means of grace, and if his health permitted, his  brethren could ever rely upon him being present at the services.

He was no fair-weather Christian. He took a special delight in the class meeting, which was frequently held at his house during his affliction. For many years the Circuit ministers have been entertained at Mr. Burnett’s home on alternate Thursdays, when the service was to be held in the chapel in the evening. We have felt the home to be the house of God and the gate of heaven. As a loyal Methodist and a thorough Christian he believed in the old Gospel, and in keeping to the well-tried paths which our fathers trod with so much joy and success.

He had the family altar, and it is a delight to hear his widow and children say that, though our brother was a busy business man, he always found time to gather them around him for prayer. We thank God for such a life, lived with deep devotedness to Christ and our Church.

Bro. Burnett passed away to the “Homeland” on Easter Sunday morning, April 19, after an illness of two years, borne with Christian patience and fortitude. Shortly before his death he testified that his feet were firmly on the Rock.

The funeral took place on Tuesday, April 21. Prior to the interment a service was held in the Ravensthorpe Chapel, conducted by the Rev. S. Bates. A large number of friends from the Wellington Road and Ravensthorpe churches attended, and showed their esteem for our departed friend and sympathy with his bereaved widow and family. The body was laid to rest in the Mirfield Churchyard, the Rev. S. Bates conducting the committal service. “A good man has gone to be with God.”

Peter was born in 1838 at Tranmire, East Witton, nr Leyburn, Yorkshire, to parents Thomas, a farmer, and Catherine. He was baptised on 20 July 1839 at East Witton, Yorkshire.

Note: Hannah Burnett’s mother had maiden name Storey, so it is possible that Elizabeth was related in some way. The possibility of this family link is reinforced as Elizabeth died in the Leyburn Registration District.