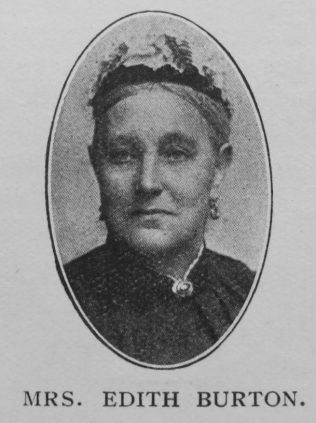 Transcription of obituary published in the Primitive Methodist Magazine by J. Lindhop

There passed from us on August 31st one whose life covered a large part of the history of Stoke-on-Trent Primitive Methodism, for fifty-five years ago our sister was converted in John Street Chapel, and to the end she remained a loyal daughter of our Church. She and her husband toiled and sacrificed for Zion, denying themselves many comforts that theirs might be the joy of giving to the cause. In the days of her strength she was most zealous, and was always a real praying woman.

At Mount Pleasant, on the Stoke Circuit, her children were brought up, and trained in such a way that she may well be thought of as (to use George Macdonald’s phrase) “one of God’s mothers.’’ There her son James, now in the foremost rank of our ministers, received his Sunday School training. Circumstances necessitated removal from the Circuit; but Mrs. Burton and her husband returned to Stoke a year and a half ago, and her life ended, after a very brief illness, in association with the Church which she first joined after her conversion fifty-five years ago. She was in her 79th year.

She was quite a picturesque personality. To see her once would mean to remember her always. She might have sat to an artist, and his faithful portraiture of her upon canvas would not have disgraced the walls of an Academy. A queen among women, our sister’s chief characteristics were spirituality, strength, and womanly statesmanship, and with these she combined a singular charm of manner which made her personality of more than usual interest. For more than fifty years she had been a hand-maiden in the service of the King, and had gone to and fro in the courts of His house. Like the Vestal Virgins of far-gone days she had kept the altar fires burning day and night, and had lived as one that awaited her Lord’s coming.

Little did we think that her passing was so near. After a few days’ illness the Angel  Visitant knocked at the door of her life with the fateful message —“The Master is come and calleth for thee” That message was no surprise, for she was ready with her lamp trimmed and burning—yes, ready to meet the Bridegroom.

On September 3rd she was buried amid many tokens of esteem. She was conveyed from her home to the sanctuary she had loved so well. Loving hands carried the mortal casket through the same doors and along the familiar aisle she used to tread with reverent step, for she was ever a devout worshipper. The Rev. F.W. Henshall conducted the service, and Revs. W. Bennion and J.E. Woodfield took part. She was laid to rest in Hartshill Cemetery—in a spot where the light of the westering sun and the southern breezes will play upon her grave—alone with the flowers, and God; but we shall see her again “when the day breaks, and the shadows flee away.” Our farewell is but for a little while.

Edith was born abt1832 at Leigh, Staffordshire, to parents Thomas, a farmer (1841) and Esther.

Before her marriage Edith worked as a house servant (1851).

Edith died on 31 August 1910 at Stoke on Trent, Staffordshire.