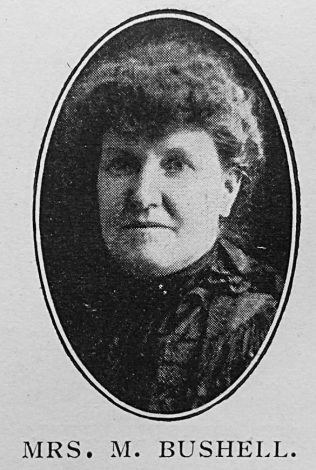 Transcription of obituary published in the Primitive Methodist Magazine by D.S. Lees

After six months painful illness, Mrs. Bushell, the wife of our esteemed Circuit Steward, was called home on July 20th, at the age of 54. All her life she was a devoted member of our Church, actively engaged in its work, especially at Risca and Cross Keys. Well-known throughout the Circuit, she showed practical sympathy in the other churches and was anxious for their progress and prosperity.

As wife of the Circuit Steward she had regard to the home comfort of the minister and his family, and ever desired and sought their happiness. As a Christian she was sincere and devout. She had not much to say about herself or her experience, but she clung firmly to her Lord.

A few brief testimonies from others will show the esteem in which Mrs. Bushell was held. “One who was loved by all who knew her.” A young minister writes: “I look back with keen pleasure to my acquaintance with her, and shall not soon forget her kindliness and consideration towards me.” ‘’For full thirty years I can testify to the beautiful Christian and womanly character of your late wife. To me she was one of the most sisterly of women that I ever knew and withal so bright and cheerful even when weak and ill. To us all her memory will be blessed, and long may its fragrance linger to cheer the coming days.” “She had early accepted her Saviour and so stood ready for the coming of the King.”

We miss her in the activities of the church and in its quieter services and meetings, but the vacancy is even greater in the home and affection of her husband and children, for whom our hearts go out in sympathy and prayer.

The funeral sermon was preached September 11th, by the minister of the Circuit. Of her we can say:

‘‘Thine earthly course is ended,
Thou hast obtained the prize.”

Matilda was born in 1856 at Abersychan, Monmouthshire, to parents Samuel Adams and Mary Ann Jenkins.

She married Lorenzo Bushell (1854-1922), a colliery examiner (1901), in the spring of 1874 at Risca, Montgomeryshire. Census returns identify three children.