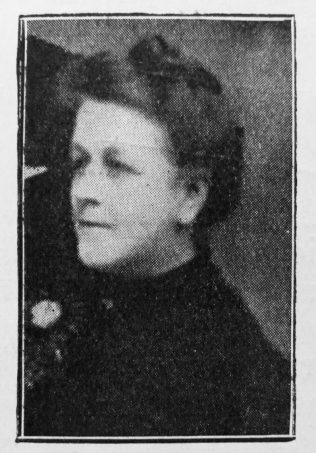 Transcription of Obituary in the Primitive Methodist Magazine by F. Jeffs

The Petre Street Church – (Sheffield Third), has sustained a heavy loss in the decease at fifty-two years of age, of Mrs. J. Butt, which occurred on Sunday, May 13th.

In Mrs. Butt’s case, a character of singular excellence was matured by a very full and varied experience in both service and suffering. We see in her a splendid product of Primitive Methodism and of “the grace which is in Christ Jesus.” She was converted in early life, was most punctual and methodical in her habits as a Christian from the outset, and made her whole career a free and ungrudging gift to her church. Strength, too, and facility for its best use, were given to her by being united in marriage with a loyal and hearty Primitive Methodist, one whose whole manhood has been a fine expression of sane enthusiasm for the kingdom of God.

In reviewing her life one wonders that a person so quiet, measured, unobtrusive, could have achieved so much, and this becomes more remarkable when it is discovered what an amount of affliction and adversity it was her lot to know. It would have been impossible, but for her intimate acquaintance with her Saviour, and with the springs of Divine power. Without wealth or large mental culture, or more than average physical energy, and in spite of household cares and struggles, Mrs. Butt’s service grew to noble dimensions, and was all done with conspicuous regularity and thoroughness. In the Sunday School, the Class Meeting, the Band of Hope, the Mothers’ Meeting, in family visitation, in bazaar efforts, in missions, her industry was marvellous. By sheer plodding and high spiritual quality our sister came to be regarded as amongst the very best of the devoted women who adorn and make strong our Petre Street Church.

It is not surprising that her end was full of peace. During her mortal sickness, which was severe, no word of complaint or fear passed her lips. To her was given a full assurance of hope unto the end. Her last hours were occupied more with the blessedness to which she was going than with the world she was leaving. The triumph over self and the triumph of faith and love in Christ were complete.

The funeral service was conducted by Revs. J. Holland and W. Hughes, the writer being too unwell to take part. But he is glad to bear his personal testimony in this written form to the beauty of the life which has now passed beyond the shadow into “the heavenly places.”

Elizabeth was born in 1854 at Sheffield, Yorkshire.

Elizabeth died on 13 May 1906 at Sheffield, Yorkshire.

John married Hannah Bowers, nee Wilson in the summer of 1907 at Sheffield.