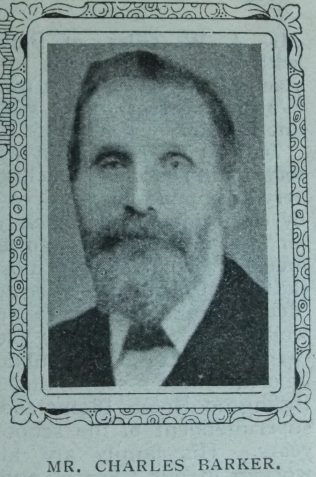 Transcription of ‘Sketch’ in Christian Messenger

Mr. Charles Barker is not a man to push himself to the front, but it will be felt where he is best known that he richly deserves some place in our denominational annuls. Born of godly Wesleyan parentage at Barton-on-Humber, in 1845, born again of the Spirit in 1865, in a revival, he began work at once in cottage meetings, visitations, with special attention to the sick. In such work he is facile princeps today, and has thus led many to God. A year after conversion he removed to Hull and joined Great Waltham Street Wesleyan Church, at which Dr. Waller was junior minister. He afterwards removed to York and joined Wesley Chapel. From thence he went to Poplar. In 1870 he crossed the water to Erith, and finding no Wesleyan cause was induced by that vigilant recruiter, Mr. J.W. Giles, of Belvedere, to unite with our Church. His marriage the same year was the climax of a romance of his Great Waltham Street days, which, however, is another story.

In 1873 he became an exhorter, and soon took a full share of preaching work. Always very acceptable, his services are characterised by earnestness and fervency, and the “open air” has ever been recognised in his “call to preach.” He has held most of the offices of the Church, has been twice delegate to District Meeting, and is a most ardent temperance worker, securing many pledges and often carrying tracts to the public-house. In 1880 he commenced a school and Band of Hope at Eglington Road, Plumstead. Here he was superintendent of the school for twenty-four years. His family are all members and workers in our Church, and it is impossible for anyone to come into contact with our brother without being blessed, and seeing that the “grace of God is magnified” in Him.

Charles was born in 1845 at Barton on Humber, Lincolnshire, to parents William and Jemima. William was a farm bailiff (1851).

Charles removed to Catford in 1912, where distance compelled him to be associated with the local Wesleyan Church. His obituary records that strength and energy characterised him throughout. Widely known and respected for his uprightness and strict obedience to principle, he nevertheless expressed with old-time frankness and frequency his unfailing sense of joy and assurance. The manner of his death was, as that of his life, enriched with prayer, hymn singing and Bible reading.