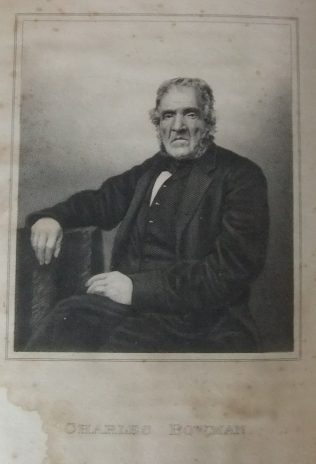 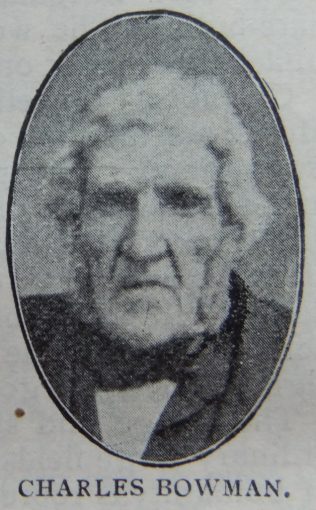 Charles was born on 13 April 1795 at Huntingdon, Yorkshire to parents William Bowman and Ann Growcock. He was baptised on 26 April 1795 at Huntingdon. In 1820, he went to live with Mr Bond of Wheldrake, who was a Wesleyan local preacher. His daughter was his first wife. They moved to Hull in 1825. Charles earned his living as a flour dealer.

Charles joined the Primitive Methodists in 1825 and in July 1831 went on the plan. In 1834 he became a class leader, in 1841 Sunday School Treasurer. He also held the office of Circuit Steward.

Kendall writes; ‘A man in many respects of a very different type was Charles Bowman. He was unmistakably eccentric, narrow in many of his views, blunt, the sworn foe not only of tobacco, but of the moustache, of musical instruments employed in the service of the sanctuary, and of everything else which seemed to him to approach to conformity to the fashions of the world. But he had many estimable qualities, and it was by virtue of these, and not of his eccentricities, that he won the regard of his brethren, and was appointed a permanent member of Conference. He was punctual, untiring in labours, intensely loyal, and capable of strong attachments, as was evidenced by his profound reverence and affection for William Clowes. Nor was he without a grim humour of his own, which made some of his sayings live in the memories of men. When, in order to keep moving with the times, it was proposed to bring a harmonium into West Street chapel, Charles was asked for a subscription. He complied with the request of the daring collector, and when twitted with his inconsistency gave as his answer : ” Well ; if we are to have the Devil in the singers’ pew, we may as well have him in one piece as in many.”

At the time of his death, Charles had in his possession a walking stick belonging to William Clowes. He wished it to be sold and the proceeds used to support West St Chapel. The stick was purchased by Henry Hodge for the sum of £4.

Charles was married to Miss Bond. Records show one daughter.