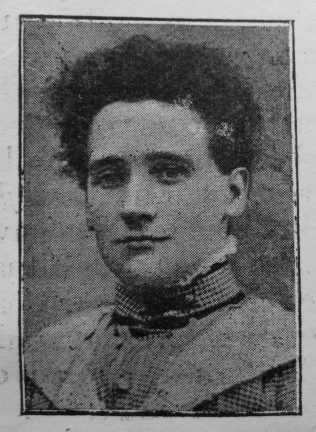 Transcription of Obituary in the Primitive Methodist Magazine by Isaac Brentnall

Claudia Brentnall, wife of the Rev. Isaac Brentnall, of Aberdare, was the daughter of Thomas and Mary Ann Harry, and sister of Rev. Samuel Harry.  She was born at St. Austell Downs, Nov. 10th, 1864, and exchanged mortality for life on Easter Sunday morning, April 23rd, 1905.

Her father was for thirty-three years a most acceptable local preacher and sought to train the children to fear God. Hence it is not surprising that early in life, Claudia was the subject of religious impressions, and in her fourteenth year she passed consciously from death into life by personal contact through faith with Christ.

She soon became identified with various branches of Christian work, but her principal service for the Master was in connection with the ministry of her husband at Midsomer Norton, Aberavon, London, Lydney, Dudley, Derby Central, Exmouth, and Aberdare Circuits.

For nearly two years she suffered very severely from the effects of cancer in the stomach. But she did not murmur or complain, but trusted in Him, who has said, “My grace is sufficient for thee,” and she found the promise fulfilled.

When in Derby she passed through a heavy trial in the death of her eldest son, Harry, a very promising lad, and she also suffered the loss of two other sons. She was strongly attached to her children, and it was a most affecting sight to see her take an affectionate farewell of the six children, husband and mother who mourn her loss. Yet when the call for “higher service” came she was willing to surrender all, and as she crossed the Jordan she said, “I am going to Jesus,” and upon her thin face a heavenly smile rested, as she stretched out her wasted hands to greet her Lord, and it was just as the sun was rising on Easter morning that she ascended to join her risen Lord in the land where the inhabitants never say, I am sick.

Her life had been without show or parade, but it was a quiet and earnest attempt to do the will of God as wife and mother, and to assist her husband in all church work. She had zealously assisted in working for bazaars, especially in connection with the churches in London and Derby Central, and she is held in the highest esteem by all the circuits, as can be seen from the two hundred letters of sympathy I have received since her death. One letter says: “The news was startling. I never dreamt she was so near the homeland. She is not here, she is risen. All her beautiful life-twenty-five years of which I have known her – has been a rising. What a beautiful spirit hers was when I first entered the home in 1880, she was winsomeness itself, and through all the years since I have held her in high esteem.”

The Derby Central Church Secretary writes: “The circuit adjourned quarterly meeting sends you a resolution of sympathy. We remember your wife while with us, with happy memories in her quiet but active and successful Christian labours as a minister’s wife. Much of her labours were unspoken, but to-day they live, and as a circuit we mourn her loss. We especially remember how willingly she sacrificed you during the completion of our great debt reduction scheme, and helped to bring it to a successful issue.”

It may truly be said of my dear wife, “she rests from her labours, but her works follow after her.”

May we all meet her again in the tearless, cloudless, and painless land. Amen.

Claudia was born in 1864 to parents Thomas, a tin miner, and Mary Ann.