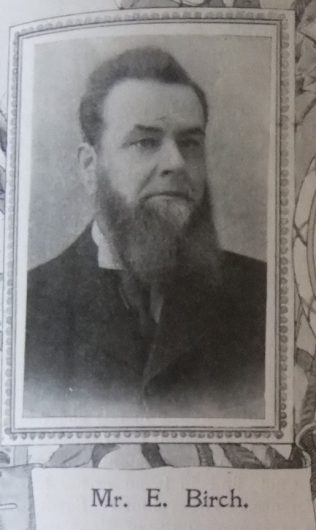 In Mr. Edward Birch the Shrewsbury circuit possesses an ideal steward. He is a man of exceptional parts, of high character and sterling worth. Notwithstanding the exacting demands of a large business, his gifts and service have ever been placed at the disposal of his church. Though only in his fifty-ninth year he has been a member for forty-three years, a local preacher forty-one, Superintendent of the Sunday School thirty-three, Circuit Steward eight, for many years a member of the District Committee and has several times represented the circuit at District Meetings. He is a splendid type of Primitive Methodist, has a good grip and knowledge of its constitution, genius, and work, and is a liberal supporter of its various funds and institutions. He is a loyal and generous friend to the ministry. Our prayer is that he may be long spared to serve the church he loves so much and has served so well.

Edward was born in late 1847 at Shrewsbury to parents Robert and Martha. Robert worked the land.

Edward worked as a hairdresser.

He married Mary Davies (1835-1904) in the spring of 1873 at Shrewsbury, Shropshire. Census returns identify two children.