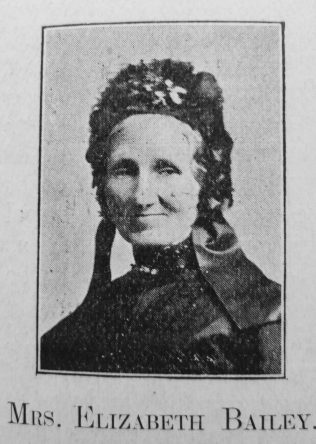 Transcription of Obituary in the Primitive Methodist Magazine by J.G.C.

Elizabeth Bailey’s God-appointed mission upon earth was closed on the 19th January, 1904. On that day, after more than 77 years sojourn, she passed to the rest that remaineth for the people of God. Born at East Rudham, in the County of Norfolk, she was introduced to the services held in a cottage by Primitive Methodists, and there at the age of fourteen she gave herself unreservedly to the Lord Jesus Christ. For 63 years her membership with the Primitive Methodist Connexion was honourably maintained. Among the conspicuous forms of service rendered by her, we may recall – nine years her house was the meeting-place for worship, at East Winch; for years her work as a Sunday School Visitor, and occasional preacher was much appreciated; her home all along the years was freely opened for hospitality to the preachers, both ministerial and lay; her interest in Christian Work further afield, was manifest in the missionary box, which was an essential article of household furniture. As wife, mother, and friend, the impression her life has made, will not easily be erased from the memory of those who knew her. Her sunny countenance, intense religious devotion, and sterling worth, endeared her to many hearts. A large congregation met in Flitcham Chapel, just previous to the interment, and among those present were the following ministers, all of whom are personal friends of the family: Revs. J.G. Cushing, (Circuit Superintendent), B. Bell  and T.Woodall (Lynn), J.C. Mantripp (March), and W. Booth (Fakenham). The Flitcham friends concluded the service at the graveside by singing one of the deceased’s favourite hymns, “Only remembered by what we have done.” Much sympathy is felt for the surviving husband, son, and three daughters.

Elizabeth was born abt 1827. The 1851 census describes her as a servant living on a farm.