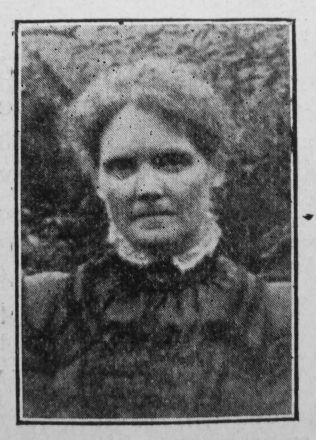 Transcription of Obituary in the Primitive Methodist Magazine by Henry Davenport

Our Church at Alsager, in the Talke circuit, has sustained a heavy loss by the translation of the above, which occurred on Wednesday, July 13th, 1904. She was born at Oakanger (Oakhanger), in the Sandbach circuit, on January 16th, 1854, and had the inestimable advantage of being the child of godly parents. Her father, the late Joseph Asbury, was a local preacher in the latter circuit for upwards of fifty years, her mother also, while health permitted, was a strenuous worker in the Church, being especially devoted to the Missionary Cause, for which she travelled hundreds of miles, with the result that for many years her box was one of the best in the Tunstall District. When the subject of this notice was about six years old, the family removed to Winterley Mill, and here she continued to reside until her marriage to him who now mourns her loss. Their home at Winterley, being very central, became a regular calling place for the circuit preachers, and to the general influence thus shed upon her in the home during the most impressionable years of her girlhood, her conversion is attributed.

At the age of thirteen she became a member of her father’s Society Class, passing from that, on her marriage, to the class led by her husband, and of this she remained a devoted and consistent member until the removal of the family to Alsager, with the Church at which she became closely identified until her death. Like her mother, our departed sister was deeply interested in Mission Work, and for a number of years travelled long distances as a Missionary collector. She was also an earnest Sunday School teacher as long as domestic circumstances would allow, and indeed, as her Pastor has well said, “everything that had to do with the Church’s Welfare, had her sympathy and active interest.”

But her real life-work was done in the home. In her marriage she was most happy. Her husband, like herself, was born in our Zion, being a Primitive Methodist of the third generation, and for the greater part of his life a local preacher, class leader, trustee, and Sunday School teacher. Theirs was an ideal union, they understood each other perfectly and were absolutely of “one heart and one mind.” The newly-formed home was at once consecrated by the erection of a family Altar – an institution, never, in their case, allowed to become obsolete. It was a home permeated through and through with the sweetest Christian influences. The deepest desire of each – a desire amounting to yearning solicitude – was that their four children should grow into goodness as they grew toward manhood and womanhood. The ceaseless, faithful prayer has been abundantly and blessedly answered. Each child is now a member of our Church, and two years ago the only son was received on full plan as a local preacher. In addition, all four are life-long abstainers and actively engaged in temperance work.

One of the joys of our dear friend’s life was to entertain the preachers, whom she regarded with a respect akin to reverence. The atmosphere they breathed in her home was one of serenity and peace. Hers was essentially a peaceable spirit; – in strife of any kind she would take no part. The embodiment of womanly modesty, she sought no prominent positions, in the Church, and was never demonstrative; but none ever discharged the duties of life more faithfully and well. It is to the presence within its pale of men and women of her type of character, that our Church pre-eminently owes its solidity and progress.

The breakdown in her health came unexpectedly about eighteen months before the end, and thenceforth she was an invalid, often suffering acutely. But as the stars shine with a brighter lustre in the deepening darkness, so, as our beloved friend passed further into the night of weakness and pain, the sweet graces of her character became yet more clearly revealed. Throughout the long drawn agony, not a murmuring word escaped her lips, – not a doubt of the Father’s love cast its shadow upon her spirit; and even when her own suffering was at its height, she could think sympathetically of, and pray for, those whose sufferings she regarded as greater still. The end came somewhat suddenly at last – and the wearied pilgrim had entered the rest of our Father’s house. Her earthly remains were laid in the beautiful burial ground at Alsager, on July 16th, the circuit ministers, Revs. T. Kynaston and S. Parlow, officiating.

Esther was baptised on12 February 1854 at Sandbach Primitive Methodist Circuit, Cheshire.  Her parents were Joseph, a corn miller and grocer, and Sarah.