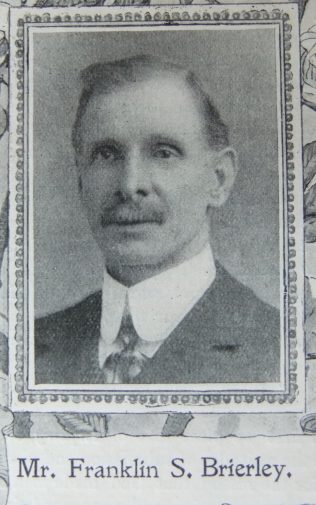 Of Mr. F.S. Brierley one writes with a will. Probity, devotedness, sagacity, and capability are obvious in his character. At he age of fifteen he became a member at Bourne Street, Oldham III., and in the same year he was made a teacher in the Sunday School. Step by step he went through most of the positions in that school, and when, about thirteen years ago, he removed to Hunslet, Leeds, he at once associated himself with the Joseph Street Sunday School, and is at present the teacher of the young men’s select class. His is a keen and discriminating student of political and social matters, and might have won distinction on these lines, but the whole of his spare time is devoted to the church. In addition to offices connected with the school, he is a vice-president of the A.B.C. and of the C.E., both flourishing institutions at Joseph Street. He is also a local preacher and Senior Steward of the station (Leeds IV.)

Franklin was born abt 1860 at Chadderton, Lancashire to parents John and Betty. John was a cotton power loom weaver.

Franklin worked from a young age as a piecer in the cotton mill. At the time of the 1881 census, Franklin was a cotton winder and the family were living at Oldham, Lancashire. By 1891 Franklin had become a sewing machine agent. The 1911 census records his occupation as clothier and costumier.