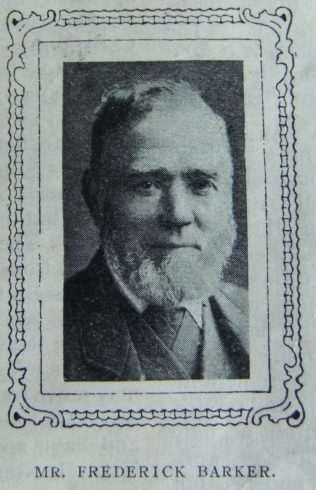 “HAVE you a Class leader,” inquiries the Editor, “who, taking into account, age, usefulness, length of service, and efficiency as a Class leader, is suitable for insertion in the MESSENGER?” Of course we have, for such is Brother Frederick Barker, who for forty years, has faithfully discharged this ministry. A local preacher for between forty and fifty years, and steward of the Fincham Church on the Fincham Branch of Lymn Circuit, he is a strong pillar of the church.

Brought to Christ in the full vigour of his young manhood, he has consecrated a long life to the service of God and the Primitive Methodist Church. Through lack of schooling when a boy, he did not possess even the barest rudiments of learning at the time of his conversion, but despite this heavy handicap he has so put himself to school that he is listened to with pleasure, either in the Class meeting or the pulpit. As a farm foreman, he has lived close to nature’s heart for many years, and throughout the seventy-two years of his life has learned many of the lessons nature is ever waiting to teach the observant and receptive mind.

In all his work our brother has been faithfully assisted by his wife, a true mother in Israel. Brother Barker has had the joy of ordering his household after him, his three sons as local preachers, etc., rendering splendid service to the church of their childhood and youth. One has passed into the life beyond, another has laboured most acceptably as a hired local preacher for some years, while a third is doing good work in our Dunstable Road Church, Luton. His eye still undimmed, and his natural force but little abated. We look for many years of service from our loved and honoured brother.

Frederick was baptised on 15 March 1840 at Fincham, Norfolk. His parents were William, who worked the land, and Mary.