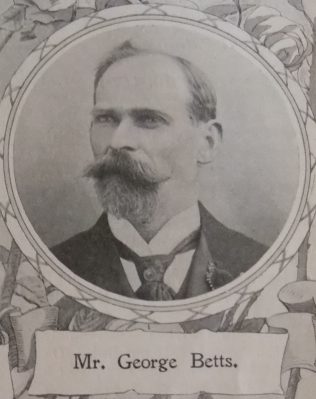 Mr George Betts is the Circuit Steward of Manchester I., and has filled a large place in the life of the Church and School for several years. An acceptable Local Preacher, founder and first President of the Christian Endeavour Society, and conductor of a successful P.S.A. which grew out of his select class, he has been a generous supporter of our Church. Recently when ill health compelled his removal to the country the members and friends of Collyhurst hung a large framed portrait of him, suitably inscribed, in the Sunday School. Born at Hanwell (Oxon.), he attended our Sunday School there. Services were held in a cottage and Mr Betts remembers helping his father make straw mats for people to kneel on. When seventeen he came to Leeds and was converted under the preaching of Dr. Joseph Wood. Removing to another part of the town he joined the New Connexion, and rendered valuable service till his removal to Manchester when he again associated himself with our Church, which he has faithfully served for many years.

George was born in late 1855 at Hanwell, Oxfordshire to parents James and Ann. James worked the land.