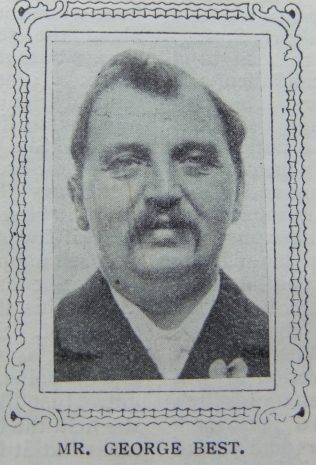 Though still a young man, Mr. Best has, for many years, been a successful Class Leader, acceptable local preacher, and painstaking Sunday school teacher in association with our Jubilee Church, Durham. For brief periods he has been called away from the city, and on these occasions has identified himself with the work of other churches; but, with these few exceptions, his time, strength and talents have been devoted to the Durham Church. The church that witnessed the conversion of his boyhood rejoices in the labours of his manhood.

Our friend’s class not only “meets,” but rejoices in excellent attendances of its members and most profitable and inspired meetings. The leader has mastered the art of interesting the people, and, while he conducts his class on old Methodist lines, he is sufficiently alert to introduce to the meetings such methods as command the sympathy and service of the younger members. He knows how to use the members and to find a place for differing gifts. The secret of his success lies in diligent preparation. He prepares for the class meeting.

The class meeting is not, however, the only place where he commands success. His genial, sympathetic nature brings him much work that is unseen by men. He is an attractive platform speaker, and is much in request in his own Circuit. Reliable, industrious and earnest, he claims respect and attention in the pulpit. A thorough-going Primitive Methodist, he is active and useful in official courts.

Mr. Best gives his strength to the Church, and has not sought positions in public life. His interest, however, in public questions is keen, and his judgement of national affairs bears the tone of his evangelical faith. His thoroughness and devotion have been honoured by his brethren by appointment to the most responsible positions in the church. His heartiness and cheer bring hope to every task; his serious devotion clothes all labour with dignity. He works; his activity inspires.

The subject of this sketch was probably born in Durham City in 1864. The 1871 census return shows him living with grandparents Thomas and Margaret Best. Thomas was a carter. In 1881, George was a labourer, living with an uncle. Later census returns describe him as a blacksmith.