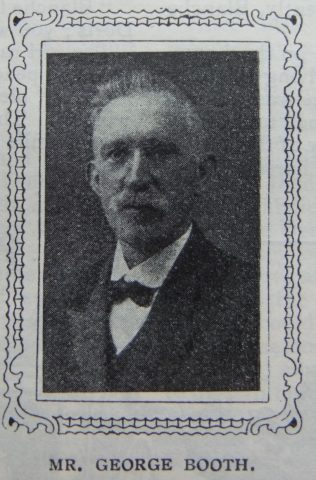 George Booth, of Clitheroe, has been, for almost forty years, one of our standard bearers.

Our cause at Clitheroe has passed through many dark and discouraging periods, but through them all Brother Booth has remained a most loyal Primitive Methodist. He is one who abounds in work. He has held almost every position in the Church, School, and Trust. He has been choirmaster for nearly thirty years, Sunday school teacher thirty-seven years, secretary of Trust twenty years, Class Leader twenty years. These are positions he still holds – all with marked ability. He is very punctual, and very methodical. Every letter written by him as Trust secretary, has been accurately copied, dated, and filed for future reference. This illustrates all his work. His great care of letters and church documents has, on several occasions, proved to be invaluable. But his best work has been, and is still being done in his Sunday Afternoon class. Never was his class healthier and larger than to-day. He is both Class Leader and teacher of our young women. Every Sunday, the largest class-room we have is crowded with young women who come to hear Mr. Booth expound the word of God. The gracious influence exerted by Mr. Booth on the young women of Mount Zion cannot be estimated. They are always ready to help him in anything he undertakes, and under his leadership, have raised vast sums of money for Circuit and Trust funds. Our friend is a member of the District Committee, and many times has represented his Circuit at the District Meeting. His home is the preachers’ home – always open. May he long be spared to serve the Church he so deeply loves.

The subject of this sketch was probably George Booth, born in 1853 at Clitheroe, Lancashire, to parents Amos and Martha. Amos was a warehouseman (1871).

George died in the summer of 1908 at Clitheroe, Lancashire.