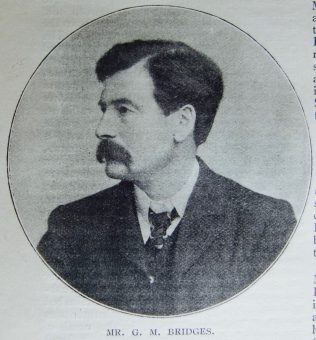 Transcription of Sketch in the Christian Messenger by A.T.W.

MR. BRIDGES is one of nature’s real gentlemen, matured and mellowed by association with Jesus Christ, and by fellowship with those who are ruled by the Spirit of the one perfect Man. Largely endowed with those high moral qualities which touch the imagination and command confidence, Mr. Bridges has also that kindness of heart and gentleness of manner which win the respect and affection of those who are most in contact with him.

Like many other men of sterling worth to the British Empire, and like others who have been the bulwarks of the Primitive Methodist Church, Mr. Bridges is of Norfolk origin, his native place being the ancient royal borough of King’s Lynn, where he still resides. Born in 1854, he is now in the fulness of his manhood – active, vigorous, and strong, and with no apparent shadow on either his health, spirits, or family.

Mr. Bridges is the son of Primitive Methodist parents. This has counted for much. It secured to him the advantage of a godly home training, a Christian environment, instruction at our Sunday school, and the benefit of the prayers of teachers who were eminent for goodness and zeal, who walked and talked with God.

In his boyhood Mr. Bridges was apprenticed to a hosiery and outfitting business, and worked at it for eight years. Shop work, however, was not congenial to his tastes. Having a great liking for modelling and scenery-painting, his interest was divided between his duties at the counter and his desire to use the pencil and brush. Eventually his passion had its way. Mr. Bridges left the shop, and after a while created a new business, which, from small beginnings, has grown so large as to necessitate large workshops, commodious warehouses, and the employment of a considerable staff of workmen.

In starting business as a scenic artist Mr. Bridges found his vocation. He is an artist to the finger tips, and has become one of the most successful decorators in the country. He has carried out many large bazaars for religious, educational, and philanthropic societies in all parts of the United Kingdom, and always to the satisfaction of those employing him. Residing in the neighbourhood of Sandringham House, Mr. Bridges has been fortunate in receiving Royal patronage.

We have sometimes wondered why so few of our own churches secure his aid in connection with their numerous bazaar undertakings. It may be because Mr. Bridges is not sufficiently known among our people; or it may be they fear that to call in Mr. Bridges’ service will involve additional outlay. Our own experience is that in engaging Mr. Bridges we have always added considerably both to the interest and success of the undertaking.

Though a loyal and steadfast Primitive Methodist, our friend has catholic sympathies. For many years he has cherished a deep interest in the work of the Lynn Y.M.C.A., and is a member of the National Council. He has been president of the local Free Church Council and a member of the Board of Guardians for several years. In his youth Mr. Bridges signed the temperance pledge, and is an ardent supporter of all measures to restrict the traffic in drink, to rescue the intemperate, or to safeguard the children from the baneful habit of using intoxicants.

Beyond the valuable service Mr. Bridges renders to his own church at Lynn as a trustee, society steward, and president of its P.S.A., he has represented the Circuit at the district meeting, acts as treasurer of the Furnishing Fund, and has once presided at the morning meeting in connection with the May Missionary Anniversary. Notwithstanding, in our judgment, he has not yet taken the place in the councils of our church that his character and abilities entitle him to take. He Is far too modest and retiring. The time has come when, if need be, a little pressure should be used to get him to represent his district in the Conference.

Mr. Bridges is happy in his home life. He finds a worthy wife in a daughter of the late William Lift, who for more than fifty years was a pillar and an ornament of our Lynn church, and one of the most notable figures in Norfolk Primitive Methodism. One son and two bonnie little girls make up the family circle at The Friary, King’s Lynn.

George was born in 1854 at Kings Lynn, Norfolk, to parents James and Rose. James was a mariner.

George married Priscilla Ann Mary Lift (abt1864-1944) in the summer of 1885 at Kings Lynn. Her father, William was a local preacher. Census returns identify three children.