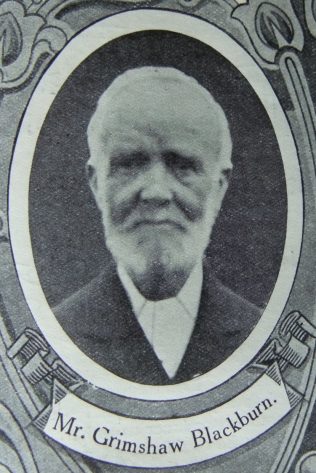 Mr. Grimshaw Blackburn, the venerable Steward of Preston 3rd Circuit, was born in 1837 at Chipping, an old-world village nestling among the hills ten miles north-east of Preston. Sixty years ago he became a scholar at Saul Street Church. He has been a member for fifty years and has has an unbroken record of useful service. Forty years ago he became an official and has held many and various offices; having been Sunday School Superintendent, Class leader, Society Steward, and for eighteen years Circuit Steward. For many years he has lived at Freckleton, an important village between Preston and Lytham, where we have a beautiful village church of which he is society steward, his son-in-law, Mr. John Rawstorne, choirmaster, and his grandson, organist. Mr. Blackburn is faithful to the doctrines and customs of Primitive Methodism, and is noted as the minister’s friend.

Census returns give the following occupations for Grimshaw.