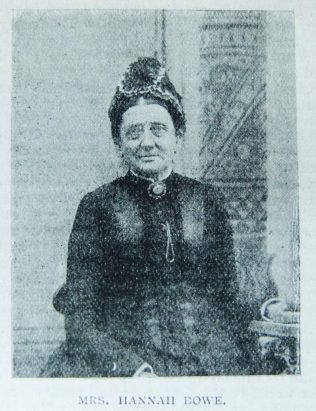 Transcription of Sketch in the Christian Messenger by J.S. Nightingale

THE roll of those members of our Church yet spared to us, whose attachment to Primitive Methodism dates back to the early days of its history, is year by year becoming a more limited one. It is, therefore, a joy to be able to present a brief sketch of one, who, if she has not been much in the public eye, in the sense of being widely known, has yet for over sixty years been an earnest and diligent worker in the Master’s vineyard, and is well worthy of honourable mention.

Mrs. Hannah Bowe was born at Allendale Town, in the North Country, 83 years ago, and becoming a member of our Church when fourteen years of age, has remained steadfast in her allegiance to Primitive Methodism. What thrilling incidents she can relate of the noble men who, as our missionaries, were amongst the first Primitive Methodists to herald the story of the Cross in Allendale! As yet no chapel had been erected when our sister joined the society. A joiner’s shop had to be improvised for worship, but not until after the preachers, such as Flesher, Oxtoby and others, had stood in the village street and exhorted the people to turn to God and live. Removing to Hexham she came under the ministry, for the first time, of Joseph Spoor, a name cherished by so many Primitive Methodists. At a later stage, with her husband, she made her home for a short time in Northallerton, afterwards removing to Consett, where for 50 years she has, in manifold forms, served the cause so dear to her heart.

In her early connection with the Consett society, its members had to be content at first with services conducted in their various homes. It was a red-letter day, however, to our friend and others, when the Venerable Hugh Bourne opened the new chapel (long since sold for more commodious premises). The memory of these opening services is still very distinctly in the mind of our sister. They recall the scene when our founder, after hanging his watch on some kind of chandelier, commenced in a simple, yet earnest manner to preach first to the old, then to the middle-aged, and afterwards to the young people. She remembers too, her first sight of the saintly William Clowes, after walking a distance of nine miles to Tow Law to hear him preach. She declares that travelling long distances to various meetings was the rule rather than the exception in those days. Preachers always received a hearty welcome in visiting her home and many are the stories she can tell of some of the ‘fathers,’ who dwelt for a short time under her hospitable roof.

Twenty-six years ago, her husband, who also was a staunch member of our Church, passed to his rest, yet in the loneliness and sorrow of widowhood her religious activities have never diminished. Many a home in Consett will be able to bear testimony to the valuable ministry of our sister in their time of need, and even yet, after more than 80 years have passed over her head, she still delights in visiting the sick, and performing services which astonish all who know her. Her interest in our Connexional Orphanage is a very real one. She sold no less than 70 tickets last year for the annual concert on its behalf. In the class-meeting with what fervour and old-time unction she will pray and speak, her leader, Brother William Skelton and fellow members all bear testimony. On New Year’s day she occupied the chair at the married peoples’ concert at our Consett Church and delighted the audience with her reminiscences, and the spirited way in which she discharged her duties. Her children and grandchildren have risen up to call her blessed, and it would be difficult to state how many of her family connections are associated with our Consett Society. She has given one son to the ministry, the Rev. William Bowe, whose work and worth as a preacher and administrator are well known, and highly appreciated in all our northern districts. She is still spared to us, and the day seems distant when she will rank as superannuated. Indeed, her sprightliness and youthful deportment are the surprise of all her many friends. We thank God for such women in our churches, and so long as Primitive Methodism can produce such loyal types of womanhood, then the future of our Zion is luminous with hope and promise. Admired, revered and loved as our sister is, she would be the first to protest against such a eulogy, but our brief appreciation of her service and work is a poor tribute to a life spent for so many years, zealously and without wavering, in the glorious service of the King of kings. That she may yet for a little while be spared to us, is our earnest prayer, and when the Master comes with the call to His more glorious Kingdom, may our sister have an abundant entrance and share the toiler’s rich reward.

Hannah was born abt 1816 at Allendale Town, Northumberland.

She married George Bowe (abt1816-1873) on 8 June 1840 at Northallerton, Yorkshire. George worked as a shoemaker, and later as a gardener. Census returns identify six children.