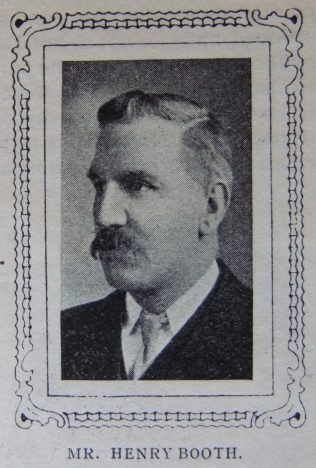 Among the men noted for consistency to principle, devotion to duty and loyalty to our church, the subject of this brief memoir can be truly placed.

From his earliest days to the present time his life has been one of trueness to principle, fidelity to duty, and unmoved attachment to the church of his choice. Mr. Booth owes much to a godly ancestry, to the Christian atmosphere of the home, and the church influences gathered round him those early days. Mr. Booth was born at Mosbro in the year I860. The place of his birth is marked by its natural beauty; it is situated in one of the most beautiful parts of Derbyshire, and nature lies around it in its most exquisite forms.

As a child he was taken to the Sunday school, and still retains his connection therewith. In early years he became a member, has been a teacher for over thirty years, superintendent for twenty-three years, and, possessing musical talent, has been in the in the choir from a youth.

The most important office of his life is that of Society steward, which office for twenty-two years he has efficiently filled. The interest of the Society stands first with him. He has spared not himself to advance the welfare of the church. Under his fostering care he has seen debt reduction, further enlargement, increase of members, so that now the church is a power in the district and an honour to the Connexion. He is blessed with one of the best of wives, a very angel in the home, a mother in Israel, and a Dorcas in the neighbourhood.

Their home is ever open to the preacher, whether lay or ministerial; all have alike the warmest welcome. Their deepest and highest joy is in the prosperity of the church. May they prosper and be in health as their souls prosper.

Henry was born in 1860 at Mosborough, Derbyshire, to parents George and Matilda. George worked as a labourer at the coal mine.

Henry began his working life as a coal miner. By the time of the 1911 census he had become an insurance agent.

Henry married Annie Elizabeth (b abt1861) in the spring of 1886 at Mosborough, Derbyshire. They had one child who died in infancy. (Note: I have not been able to determine from on-line records whether Annie’s maiden name was Buxton or Barker.)