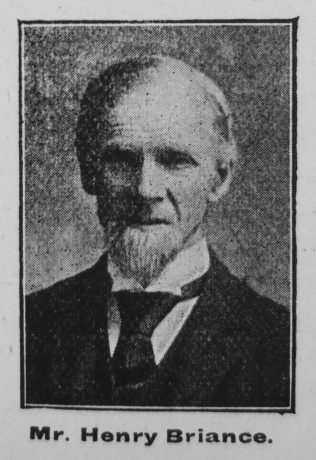 Transcription of Obituary in the Primitive Methodist Magazine by G.R.

Henry Briance was born at the village of Dudswell, May 19th, 1831, and died September 1st, 1902. When he was a young man he walked all the way to London in search of employment. Through a relative he was temporarily engaged. He soon commended himself to his employers by his diligence and tact, and was put on to the permanent staff to occupy responsible positions in the same firm for forty-four years, until he was superannuated six or seven years ago. For some years he was connected with the Wesleyan Mission Hall in Leighton Road, Kentish Town, where he made considerable progress in the Divine life, and his personality was felt as a consistent follower of the Lord Jesus Christ. Then, for the convenience of his increasing family, he joined our infant society in Kentish Town, which at that time worshipped in a railway arch. This would be about 1864. Here, he made himself at home and useful in various ways. In the important enterprise of building our Grafton Road Church, our deceased friend and his wife manifested the deepest interest, and few, if any, of our members have done more, if so much, in collecting and giving to the Trust funds than Mr. and Mrs. Briance. In my first interview with him, two years ago, I was struck by his quiet intelligence and his thorough appreciation of God’s goodness in affording him and his wife the opportunity and means of bringing up their somewhat numerous family, all of whom have been a credit and a joy. The flood tide of domestic trial and loss and sorrowful bereavement which came so suddenly and in such quick succession, had not then set in. I then began to know him in the conversations in his home, at the week-night and Sabbath services, which he attended so regularly. We used to admire his correct reading of the Scriptures, and the deep earnestness and comprehensive phraseology of his prayers. His most marked characteristics were quietness and confidence. He did not talk much nor loudly, but he possessed sound judgment and good common-sense. How confident he was in the Divine goodness and wisdom! How gratefully he spoke of the almost uninterrupted good health he had enjoyed, and his marvellous’ preservation and narrow escapes in the calling which he followed so long, and with so much conscientious industry. We shall miss him in many ways though these ties have been gradually severed by his protracted illness. As we remember him as a wise and loving father, a devoted husband, and a consistent, sympathetic fellow Christian, let us do all we can to fill the many vacancies which death and providence are constantly making, and help to increase his joy. For the widow and the bereaved family we will pray that our loving tender Father, the God of all comfort, our gracious Lord, who wept with the Sisters of Lazarus, and the Holy Spirit, the Comforter, may continue to sustain and bless them, until they meet their “loved one gone before.” The funeral took place on Friday, September 5th. The Rev. G. Rudram conducted the service in our Grafton Road Church, and the Rev. D.T. Maylott officiated at the grave, in Highgate Cemetery, when many of the relatives and friends of the deceased were present to pay their tribute of sincere respect and love. A memorial service was held in Grafton Road Church on Sunday, September 28th, when Rev. D.T. Maylott preached.

The transcription of Henry’s baptismal record gives his birth date as 14 May 1831, with his baptism on 19 June 1831 at Northchurch, Hertfordshire. His parents were Thomas, a shoemaker, and Elizabeth.