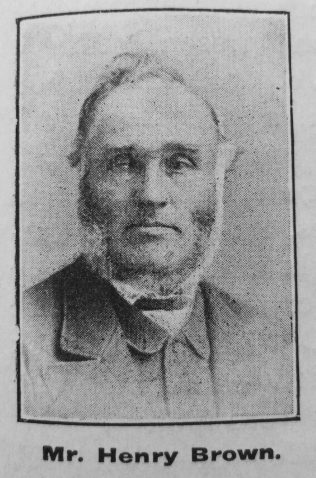 Transcription of Obituary in the Primitive Methodist Magazine by W. Gelley

This esteemed servant of God passed to his rest on Jan. 31st, 1903. It is only few men who have served the Church of Jesus Christ and become so extensively known as Bro. Henry Brown. He was born at Nappa Scarr, Wensleydale, in 1834, so that he was in his 69th year at the time of his death. About 50 years ago he came to Shildon where he continued to live until about a year before his death, when he removed to Cockton Hill. He was converted at a Sunday morning Prayer Meeting in the house of Mr. N. Pickering when he was quite a youth.

He became a local preacher during the time the saintly Joseph Spoor  travelled on the Shildon Circuit. Mr. John Boddy says: “I had the pleasure of hearing him preach his trial sermon in the old chapel in “Pointer’s Yard.” I shall never forget that night. How excited Mr. Spoor became. The sermon was on the ‘General Judgment,’ and for matter and language I have never heard it excelled.”

He was one of the most devoted and earnest workers connected with our Church at Shildon. In Revival Missions, Camp Meetings and Prayer Meetings, he was one of the most powerful men in the North. As an Evangelist he went far and near, and there are few towns or villages in the county of Durham that he has not visited. His success in winning souls to Christ was very great, and many a weak and failing cause has been made strong by his labours.

He was a man of marked personal power. He was fearless as he was frank, and had great natural endowments. He was a plain man with keen and quick intelligence, one of nature’s unspoiled children, rugged and strong. As a public speaker he excelled in easy natural expression. He had a large endowment of mother wit, and a tenacious memory, and when he had a good time and was in the pure heat of spiritual passion he was one of the most powerful orators of this district. His outlook on men and things was broad, and whilst he exercised a most happy influence in local matters which related to the town, he also took a deep interest in all public questions affecting the welfare of the nation, and no political gathering was regarded as complete if he were absent.

In his latter days he had to fight with adversity, and some few years before his death the strong man was utterly broken down, and unable to leave his home. It was my privilege to see him many times during his affliction, and never did I hear a complaining word pass his lips. He was full of anxiety to know how the circuit was getting on, and his pleasant smile and witty allusions to the old days were most refreshing. The severity and harshness of his earlier days had gone and his piety was mellow and deep. The presence of God was his comfort and strength. No cloud, no fears or doubts, took hold of his heart. He triumphed in Christ.

Large numbers followed him to his burial at Shildon, and white-haired old men stood by the coffin with the tears running down their faces, for they had lost an old comrade, who had laboured long and well.

Henry was baptised on 1 February 1835 at Askrigg, Yorkshire. His parents were Martin and Isabella.