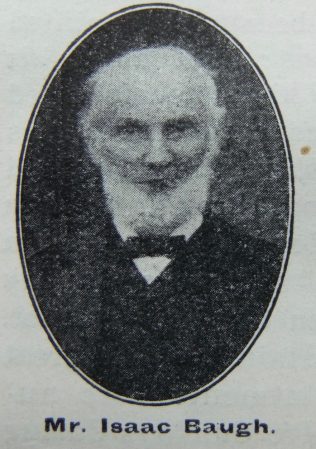 Transcription of Obituary in the Primitive Methodist Magazine by J. Elliott

In the death of Mr. Isaac Baugh, of Old Park, Shropshire, on November 24th, 1902, in the 83rd year of his age, Dawley Circuit has lost its oldest member and official. He was the second son of a family of eleven children, all of whom he survived. At 18 he lost his father and became the mainstay of his widowed mother and family. At 22 he was married to Miss Jane Jones, with whom he lived in happy fellowship for 53 years. They had eleven children, six of whom survive, and five of them are members of the Christian Church.

His conversion took place in his own home and when alone on Monday evening, January 6th, 1845. For some weeks he had been pondering the solemn business, and on the date named it was settled and sealed. From that decision he never swerved. Six months after his conversion he was made a leader, and three years after a local preacher. These positions he held unbrokenly to the end of his life.

As a Christian he walked worthy of his calling. He was consistent and exemplary. His moral influence upon his family and neighbours was most salutory. His reverent and upright life won him respect and power. As a leader he had the confidence and affection of his members. He was loyal to the circuit and connexion, and trained his members in the same principles.

As a preacher he was not distinguished by much book learning. In the first half of the 19th century educational opportunities were few. Indeed he never went to a day school, but after his conversion he educated himself and became wise in the best things. One book he studied to purpose and could expound its teaching with clearness and power. In his active years his labours as a local preacher were great. Thirteen Sundays a quarter were his common lot, and many of the journeys were long, but no one could more faithfully honour his appointments. His labours in that capacity were not without success. It is remembered that on one Sunday night in Dawley Chapel he had sixteen converts, two of his own children being among the number, and four or five of them became able and respected local preachers.

His end came sooner than was expected by his family and friends. But he had reached the condition described by C. Wesley – “age and feebleness extreme.” On the Friday night he retired to rest, and on the Monday night following he joined “the general assembly.” The last scene was just what might have been expected – calm, confident, and happy. He was buried in Malinslee Churchyard on Friday, November 28th, 1902, amid every token of respect.