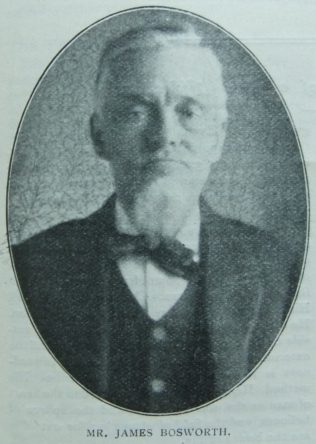 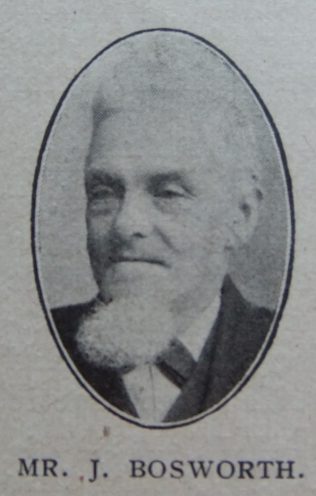 Transcription of ‘Sketch’ in the Christian Messenger by Rev John Holland

In the Leicester 1st Circuit there is no man better known or more highly respected than the subject of this sketch. For nearly half-a-century he has taken a leading part in the Circuit enterprises and developments, and at the same time, has been an earnest advocate of all that has made for the moral uplifting, social progress, and better government of the people amongst whom he has lived.

Mr. Bosworth was born at Anstey in 1841, and has lived there the whole of his life. His parents were not Methodists, but he, when a youth of thirteen years, attended some evangelical services that were held in our chapel and definitely surrendered his life to Christ. He at once identified himself with our Church and became an active and enthusiastic worker.

In 1860, during the late Rev. J. Brownson’s term as superintendent of the Circuit, he became a local preacher, and his services in that capacity were so acceptable that he was in demand, not only in his own, but also in adjacent Circuits. His preaching was marked by intense spirituality and fervent evangelism and was owned of God in the salvation of sinners. Many will be his “crowns of rejoicing in the day of the Lord.”

The circuit has shown its appreciation of his character and work by electing him, on three different occasions, to represent its interests at the District meeting. For many years he has served on the District Committee, and three times has been its representative to the District Meeting, which on one occasion elected him to the vice-chair, and three times chose him as a delegate to Conference. These things all indicate the great esteem in which our brother is held in the Nottingham district.

Mr. Bosworth’s interest in the wider affairs of the Church has in no way impaired his local efforts. He has always manifested a keen and practical interest in every institution in connection with our Anstey society, which he has served since 1869 as a trustee and in various other ways.

But the subject of this sketch has not confined his interest and sympathies to the Church. He has been a member of the Parish Council since its formation, and its chairman for the last seven years. He is also a district councillor and in the best sense a Guardian of the Poor. The poor and the unfortunate have ever been his special care.

It is not often a Primitive Methodist local preacher is at the same time a churchwarden, but some years ago, when there was considerable dissatisfaction in Anstey over the way in which certain local charities were distributed, the parishioners attended the Vestry Meeting in large numbers and elected Mr. Bosworth to that position. In this way his neighbours showed that they had confidence in his judgement and integrity. There was not much trouble after that about the distribution of the charities.

When the Education Bill of 1870 became law our friend took a prominent part in helping to establish a school board for Anstey.

A stalwart Free Churchman and a convince Liberal in politics, Mr. Bosworth has worked hard in the interests of Nonconformity and on behalf of Liberalism. No election has taken place for many years in his constituency without him doing his share to secure the triumphant return of the Liberal candidate.

During recent illness many letters were received from political friends and opponents, in which the writers expressed their admiration for his character, regret for his illness, and hopes for his recovery. To show the esteem in which he is deservedly held in the constituency in which he lives a substantial sum of money has just been presented to him, some of which was contributed by well-known Conservatives.

His work as a Free Churchman was further recognised last year when the Anstey and District Free Church Council unanimously elected him to the presidential chair. That honour would have come a year earlier, when the Council was first inaugurated, but with characteristic disinterestedness, Mr. Bosworth insisted on another having it. The Council was only reconciled to that by his consenting to act as vice-president with the understanding that he would become President the following year.

In private life Mr. Bosworth is an interesting conversationalist, and one instinctively feels that here is a man who is keenly alive to the serious questions of the day, and one who desires the highest good of the commonwealth. He is loved by all, but he is specially the friend of the working classes, who appreciate his sympathy and trust his judgement.

In his home life he is fortunate. His good wife shares his sympathies and is a help-mate indeed. His children are following in his footsteps and are associated with us in Church membership. One son is an acceptable local preacher on our plan.

That Mr. Bosworth may long be spared to give the Church he loves the benefit of his ripe experience and wise counsels is the prayer of all his friends.

James was born in 1841 at Anstey, Leicestershire, to parents William and Elizabeth. William was a framework-knitter.

James worked as a shoe riveter.

James married Ann Turner (b abt1839) in the spring of 1875 at Leicester. Census returns identify three of four children.