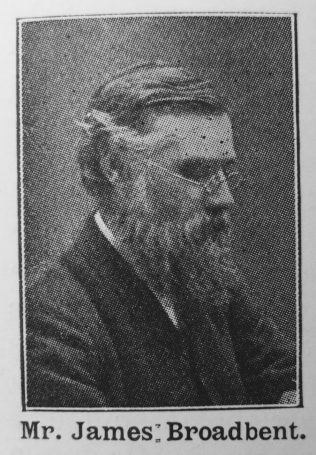 Transcription of Obituary In the Primitive Methodist Magazine by G.F. Fawcett

A GREAT loss fell upon the Church at Harrogate when the subject of this brief sketch left us for the higher service. For though he had resided here only about six or seven years, and was much enfeebled in health, he took an active interest in every department of Church life and work, and his influence was felt to be largely helpful in many ways.

It was in Leeds, in 1842, that Mr. Broadbent was born. His parents were Wesleyans, but it was in connection with our own people that he was led definitely to decide for Christ. Hence the fact of his subsequent identification with us. Of a studious nature, he was, from the first, anxious to avail himself of every opportunity for mental culture, and, though he went to work in a factory at the early age of twelve, by assiduous attendance at evening classes he succeeded in securing several certificates —Literature, Political Economy, and Mathematics being the subjects in which he most distinguished himself. To the very end he gave evidence of keen intellectual interest, and his gifts and attainments could hardly fail to strike you, even upon the slightest acquaintance, as of no ordinary kind. It may be mentioned, in passing, that many of the Services of Song he published later in life were his own composition — poetry and all.

His deepest interest, however, was religion. Early in his teens he threw himself heart and soul into religious work. It was whilst engaged as a Sunday-school teacher at Greengate that he became acquainted with her who afterwards became his wife, and is now his widow. His ability and piety were such that at the age of twenty he was appointed to the superintendency of the school. At twenty-one he became a local preacher, and at once evinced that enthusiasm for evangelism by which he was ever after so strikingly characterised. It was in evangelistic service he found his highest joy. No ambition stirred him more profoundly than the ambition to be a successful winner of souls. For some time he laboured in London under the auspices of the Religious Tract Society — laboured not only with consuming zeal, but often at the peril of his life.

On his return to Leeds he entered into business as a second-hand bookseller, to which he added later that of music publisher. The intelligence, perseverance, and tact he had displayed in other directions very soon revealed themselves in business life. He succeeded in gaining a very wide connection, which continued to increase year by year. And yet even this did not prevent his labouring most extensively in the holding of missions, as the result of which many were led to Christ.

It was after labouring in this way for eighteen years that he organised a Band of Missioners and sent them out to different parts of the Connexion. His methods of working were to some extent an anticipation of those of the Revs. Thos. Champness and Joseph Odell. He was not content with taking the responsibility of the direction of the movement and with contributing liberally to its maintenance, but gave of himself in the most absolute and personal way. Indeed, there is every reason to believe that it was mainly his excessive labours at that time that led to the permanent enfeeblement of his health. Up to the very last evangelism possessed for him an irresistible fascination.

Mr. Broadbent was a pronounced temperance reformer, and gave of his time and energy to the advocacy of temperance principles. In the earlier years of the Salvation Army he was in deep sympathy with its aims and work, and a subscriber to its funds. He was for many years a personal friend of Mr. and Mrs. Booth.

There is one feature of his character that is deserving of special mention, inasmuch as it is all too rare. He never spoke unkindly of others, and never permitted any of the members of his family to do so. A favourite maxim of his, and a maxim he scrupulously observed, was this:— “lf you can’t say anything good of others don’t say anything at all.”

When I came to Harrogate he was one of the first to approach me with assurances of practical sympathy and co-operation. At that time he was able to preach occasionally — was the leader of a week-evening class, and was also connected with the Rev. James Polwarth in the teaching of a young men’s class in connection with the Sunday School. He was keenly observant of the signs of the times, not locally and denominationally only, but generally. Over and over again I was impressed with the remarkable combination in him of depth and definiteness of conviction with breadth of sympathy. He was most pronounced in his belief, but he was not narrow. A friendly discussion on some theological or religious theme he dearly loved, and one generally felt that such discussions were helpful and stimulative.

Early in 1900 he went with Mrs. Broadbent to Ryde, in the Isle of Wight. For some time he had suffered much in his breathing, and our March winds tried him severely. It was mainly to escape these that he journeyed South. He had not been long in Ryde, however, before new developments set in. At first it appeared to be an exceptionally violent attack of indigestion, but on consulting a medical man it was found to be much more serious. He was ordered home. On the way he called to consult a specialist in London. It was pronounced to be cancer on the stomach. No hope was even suggested as to the possibility of cure. He came back like the ghost of his former self. We met him at the station, and were startled to find him so greatly changed. But he was not depressed. For a few days only he lingered, and then passed –
“To where beyond these voices there is peace.”

It was in the faith he had held and preached he died. When coming home, he said, pointing to the snow that was rapidly whitening the landscape: “Whiter than snow — whiter than snow!” When we met him on his arrival his very first words, uttered faintly, but with evident emotion, were: “The blood cleanseth.” And thus was the truth he had proclaimed to others verified in his own experience with the end in sight.

James was born in 1842 at Leeds, Yorkshire, to parents Joseph, a weaver, and Hannah.