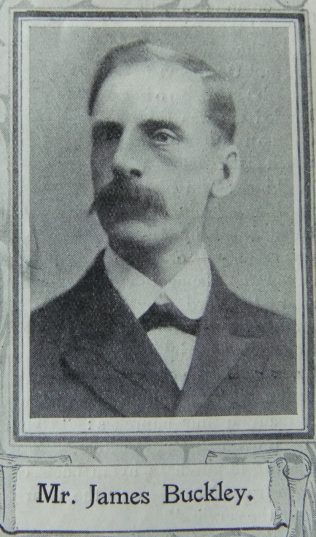 Mr. Buckley is another instance which clearly shows the wisdom of taking care of and training the child.

Born of Primitive Methodist parents he gave himself to the Master’s service while yet in his teens, and at an early age became a teacher in the Sunday School, where among other things he assisted to teach men to read and write.

His first plan as local preacher was received at eighteen, while he was an assistant class leader before twenty, and superintendent before twenty-two.

Our friend worships with Kedleston Street Society and has discharged the duties of secretary to trust and quarter day, and at the present time is one of the teachers of the Bible Class, class leader and circuit steward.

In the midst of a busy life he is actively engaged in connection with the local Temperance Society, the Citizens’ league, the Free Church Council, as well as being a member of the Board of Guardians.

From the information in the sketch, I have not been able to unambiguously identify James in census returns. Can anyone point me in the right direction?

It is likely that the Kedleston Street Society referenced in the sketch was in Derby, Derbyshire.