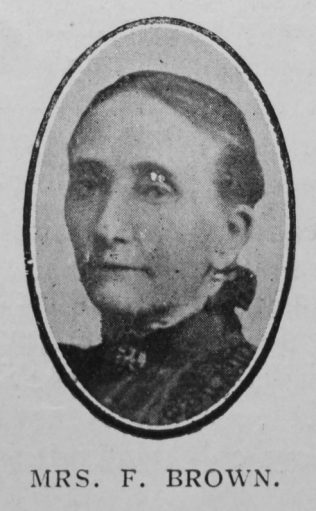 Transcription of obituary published in the Primitive Methodist Magazine by R.H.

The Blaydon-on-Tyne Circuit has suffered a serious loss in the death of Mrs. Brown, wife of Mr. F. L. Brown, the assistant Circuit Steward. As a girl she joined our society here. For nearly 40 years she has been a member, supporting her husband in Christian service. Few who came into contact with her but felt her quiet, gracious influence, and she was always ready to help the needy, and gave her services cheerfully.

As a mother she sought the spiritual well-being of her children, and had great joy when they were engaged in Church work. Mrs. Brown for more than a year before her end came was a great sufferer, but she was always patient and cheerful and hopeful. She died rejoicing in the prospect of meeting “loved ones gone before.”

On Sunday, March 10th, she and her grandson, who died about the same time—a bright, intelligent boy of ten years of age— were borne reverently to the P.M. Church,  where an impressive service was held, conducted by the Rev. R. Heppenstall, after which the departed were interred in the Blaydon-on-Tyne Cemetery.