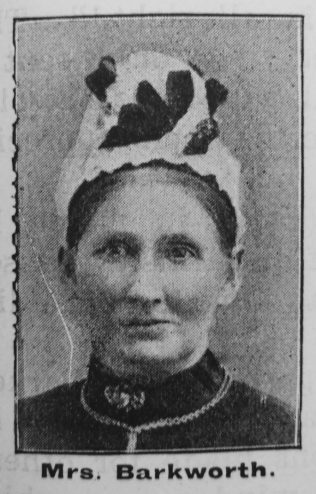 Transcription of Obituary in the Primitive Methodist Magazine by John Redhead

On Monday, December 15th, 1902, Mrs. Barkworth, of Grasby, after a short but painful illness, passed away to her everlasting rest, at the age of 71 years.

She was born at Grasby, August 21st, 1831, her early life was in connection with the Wesleyan Methodist body, but on her marriage she joined the church of her husband, and for forty years in connection with Primitive Methodism, she has proved herself to be a true lover of Zion. Upright, generous, devout, trustworthy. Truly her children rise up and call her blessed.

The Sunday school received a large share of her sympathy, and for thirty-five years she was a generous donor to the children’s treat. And when it was found necessary to replace the old sanctuary by a more commodious one, her hands and heart were given to the project. She was a Dorcas indeed. In connection with the ladies’ sewing teas, no more regular helper could be found than was our deceased sister. In fact, in all ways open to her she evinced a deep interest in the financial well-being of the house of the Lord. For over thirty years she has collected regularly in the interests of the Missionary Society. And for forty years she has kept an open house. Ministers, local preachers, and visitors ever found an open door and a hearty welcome. Her record is on high. Her works are with God.

But a month before her decease, she looked hearty and well, and we hoped for the continuance of her valuable life for some years to come. But the great Father had determined otherwise, and called her to the higher service of heaven. She was buried at Grasby on Wednesday, December 17th, amid a large circle of sorrowing and admiring friends, and on the 18th of January, 1903, her funeral service was preached in Grasby Chapel, by the writer, to a large congregation, from Psalm xvii, 15.
Say why should we grieve for those
Who safe arrive on Canaan’s shore?
Released from all their hurtful foes
They are not lost, but gone before.

Jane was born at Grasby, Lincolnshire, to parents Samuel, a landed proprietor and cattle dealer (1851), and Jane.

The 1861 census describes Jane as a proprietor of houses and land. She had an illegitimate daughter born in Hull, Yorkshire.

Jane married Joshua Barkworth (1821-1879) in late 1862 at Grasby. Joshua was a tailor and draper and had been previously married with several children. Census returns identify four children.

Following the death of Joshua, Jane ran a grocery and drapery business