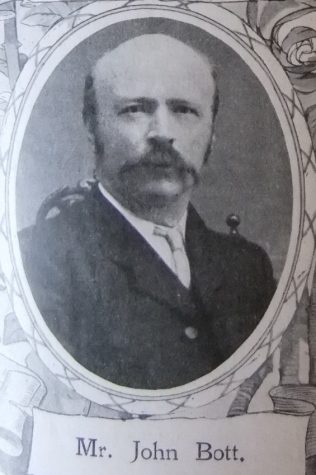 The subject of this sketch, a Primitive Methodist of the fourth generation, was born at Stanton, Staffordshire, December 13th, 1858. His ancestors regularly entertained both itinerant and local preachers. His great uncle, David Smith, at his sole cost erected our Stanton Chapel in 1824. Here Hugh Bourne frequently preached and found generous hospitality in the home where Mr. Bott was born. He was converted when eighteen and at once became a Sunday School worker. He has continued this work for thirty years and for the past fifteen years has been superintendent of our School in his native village. He has been a local preacher twenty years, delegate to District meeting, and had represented his parish six years on the District Council and Board of Guardians. He is a member of Mayfield Education Committee, Secretary of Odd Fellows Lodge, a total abstainer, a non-smoker and thoroughly loyal to all connexional and public interests.

John was born in 1858 at Stanton, Staffordshire (nr Ashbourne) to parents Jabez and Elizabeth. Jabez was a farmer.

John followed his father’s trade as a farmer.