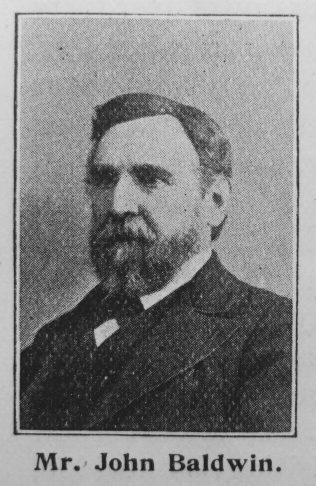 Transcription of Obituary In the Primitive Methodist Magazine by Geo. W. King

In the death of Mr. J. Baldwin, the Burnley 1st Circuit loses a loyal son and a devoted servant. He was for more than half a century a staunch Primitive Methodist, and found within the courts of the Connexion the deepest joy. Frequently he was heard to say “ If they turn me out at the door, I’ll come in through the window.” Converted at fifteen years of age he at once took up Christian work, and for fifty years gave unstinted and many-sided service to the Church. He was for forty-eight years a highly esteemed local preacher. For thirty-six years he was a class leader, in which capacity he was always at home. He believed in the class meeting, and proved his faith by attending it, not spasmodically, not half-yearly, but regularly. At his conversion he told his employer that he was prepared to work overtime any night in the week, except the night on which his class meeting was held.

As Sunday School teacher and superintendent, trustee of several chapels, circuit steward, member of district committees, delegate to district meeting and Conference, he rendered signal and appreciative service. To all his work for Christ, he never failed to bring the Christ-Spirit. He studied and planned and contrived to secure the peace of the Church. His was a beautiful spirit.

By the sweetness of his disposition, his high Christian character, his unselfish devotion to the Church of his choice, Mr. Baldwin made the name of the Primitive Methodist Church in his town respected and honoured.

Deceased was born October 10th, 1833, and died at Hazel Mount, Burnley, October 31st, 1900. He was apprenticed to the brush-making trade, and in 1854, he and his brother William, commenced business on their own account. By untiring industry, by hard plodding, and withal, by the practice of high commercial integrity, the business became one of the largest manufactories in the town of Burnley. In business circles the name of John Baldwin will be quoted in the years to come as an example of commercial integrity, as a kindly and considerate master.

Mr. Baldwin was twice married. His first wife was Miss Lord, daughter of the school-master of Higham. His second marriage took place seven years ago, and Mrs. Baldwin survives him. He leaves four sons and three daughters.

Our friend was a Liberal member of the Town Council nnine years, and was President of the Free Church Council for one year, only retiring from the latter office a month before his decease. A large sympathetic congregation attended the memorial service conducted by the writer on Sunday evening, November 11th, in Bethel Chapel, at which letters bearing testimony to the high character of the departed were read from business associates, as well as from the Revs. T. Newell, T. Mitchell, J. Swales, H.G. Button, and Geo Windram. In Bethel Chapel a neat tablet has been erected by the friends of Mr. Baldwin, bearing the inscription –
“He was a good man, and highly esteemed.”

John’s parents were Thomas, a nail maker, and Jane.