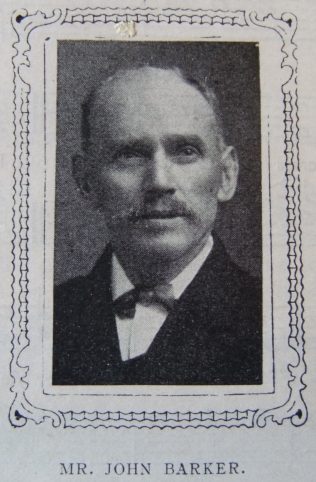 In Mr. John Barker we have the example of a man who, from unpromising beginnings, has developed a character and rendered a service which any church might regard with pleasure.

The son of a public house keeper, he was born into circumstances that were by no means prophetic of a career of godly devotion and usefulness, but early in life his association with the church strengthened him against the corroding influences we invariably associate with the trade of a publican.

In his youth he became a member of the Wesleyan Church, but on account of his work, being obliged to remove from the place of his birth, he joined our little church at Blidworth, in the Mansfield Circuit, and in the year 1879 became a Class leader. About five years later he removed to Hucknall Torkard, where for twenty-five years he has been a most zealous and devoted leader. During these years the Class under his care has grown from a membership of less than twelve, to a total of over sixty, this increase being due in a considerable measure to his assiduous shepherding and unflagging interest.

If there is any secret possessed by a successful Class leader, as exemplified by Mr. Barker, it must be that of regular and punctual attendance; the members are never in doubt as to whether the leader will be present, nor have they the weariness of waiting that awful five or ten minutes for someone to open the meeting.

Mr. Barker is zealous for his Class, as every member who would be a laggard knows. They find no rest from his persistence until they have renewed their diligence and taken their accustomed place in the weekly meeting. He never spares himself, and no absentee remains long without a visit from the leader. He has a watchful eye for strangers coming to the church.

John was born abt 1854. Census returns from 1881 give his birthplace as Blidworth, Nottinghamshire.

John started his working life as a farm labourer, but by the time of the 1891 census he had become a coal miner.

John married Ann Godfrey (abt1855-1923) in the summer of 1874 at Blidworth, Nottinghamshire. Census returns identify five of eleven children.

John’s death was probably that registered in the first Quarter of 1931 in the Basford Registration District, Nottinghamshire.