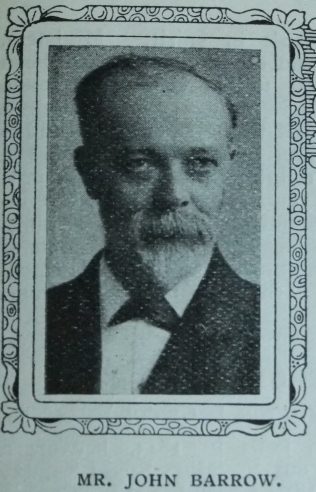 Mr. John Barrow’s early life was one of hardship and disadvantage. He was born in a public house; he never knew his father who died before his son’s birth; he lost his mother when only four and a half years of age; and he spent part of his childhood in the Chester-le-Street Workhouse.

The upward trend began when at the age of fourteen he was brought in touch with Primitive Methodism. He was converted a year later, and has been a member with us ever since. In the Sunday school and in the class meeting, in chapel and in Circuit affairs, he has been a loyal and hard worker. It is thirty years since he came on the plan and through all this time he has endeavoured to win men for Jesus. For that is ever his aim. His delight is to witness for his Lord. And he has done this with no little success, for he has been privileged to witness a hundred conversions in a single year.

Mr Barrow prepares conscientiously for his pulpit work. He has always been a reader, and has explored different fields. He acknowledges a special debt to George Macdonald, to whose writings he often turns. But theology is his favourite study. He has always loved it and has read and studied everything that he could get. For some years he has been a member of the Circuit Examining Committee, and by common consent theology is left in his hands. The candidate who comes through successfully must be well qualified. He will have a fair chance, he will even have sympathy and encouragement, but he will be put to a searching test. For thirty years Mr. Barrow has filled Primitive Methodist and other pulpits faithfully and acceptably. May he long be spared to occupy them!

John was a local preacher in the Sunderland First Circuit, not the Chester-le-Street Circuit as identified in the Messenger sketch.

John was born in 1851 at Washington, Co. Durham. His mother, Elizabeth was an inn-keeper at the time of the 1851 census, when John was one month old. In 1861, John and his brother, William, were living with his maternal grandmother, Margaret Maughan.

John earned his living as a joiner and cabinet maker.

John’s obituary in the PM Leader identifies that he spent his latter years associated with the Cleveland Road Church in Sunderland First Circuit. As a preacher he was always acceptable. There was a freshness and earnestness about him that captured his congregations. He was intensely evangelical.