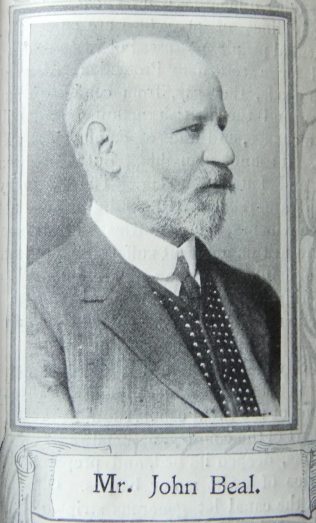 Mr. John Beal, of Hull Seventh, has been associated with Hull Primitive Methodism for forty years. He has been twice delegate to District meeting and once to Conference. As a Church worker he is in full sympathy with young life, holds the Presidency of our Young People’s Institute, and was recently awarded a certificate of honour for thirty-five years’ service in Sunday School work. He served as a Guardian of the Poor for fifteen years, was two years Chairman of the Board, and is at present Vice-chairman of its Cottage Homes Committee. A man of good business ability, sterling character, and kindly disposition, no one is more worthy of the honour, or more equal to the demands of the office of Circuit Steward. Mrs Beal is even a more ardent Primitive Methodist than her husband. One son is in our ministry, two are local preachers, and another is an exhorter on our plan.

John was born abt 1852 at Patrington, Yorkshire, to parents John Scott Beal and Sarah. John, senior, was a joiner.