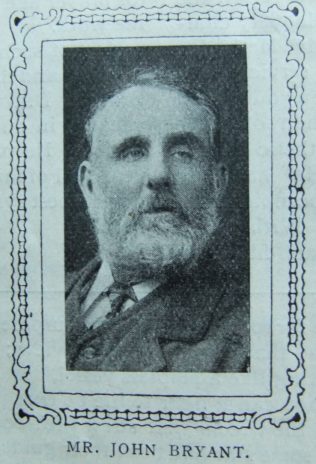 The hardy men of our coasts gave birth to, and manned the navy which won for Britain the Empire of the ocean. Similarly they have aided the extension of Christ’s Kingdom. Cornish fishermen’s religious fervour is known on all our shores. “The life of Hugh Price Hughes” tells how, when he was a boy of thirteen years, at school at Mumbles, Swansea Bay, one Sabbath a Cornish fishing boat beached, and its men attended chapel as is their custom, for they are strict Sabbatarians. They made the prayer-meeting after the preaching lively. Such praying young Hughes had never heard nor imagined. He felt perplexity and distress of soul, till he submitted to Christ, and in a few weeks received the light and joy of Christ. Those good fishermen little thought that they were in at the making of the last great reformer of Wesleyanism.

To this class belongs Brother John Bryant. Born October 25th, 1851, his most cherished memories are of his father, a good Primitive, and his grandmother, a worthy Wesleyan. He decided for Christ thirty-nine years ago; and twenty-seven years ago luxuriated in “ green pastures” if not “by still waters” in J. Cocking and W. Harry’s class. He is a Society steward and leader of some years standing at St. Ives. He is a man of sterling principle and settled convictions. In his prayers, testimony and conversation there is a note of intense piety. He is sympathetic, kind, constant, regular at all services, and is trusted and loved by all. May his like increase.

Primitive Methodism has little to fear while she can send such sturdy fishers of men to rescue the perishing from the storms of the ocean of life.

John was born at St. Ives, Cornwall, to parents John and Elizabeth. John, senior, was a fisherman.

John followed his father as a fisherman.