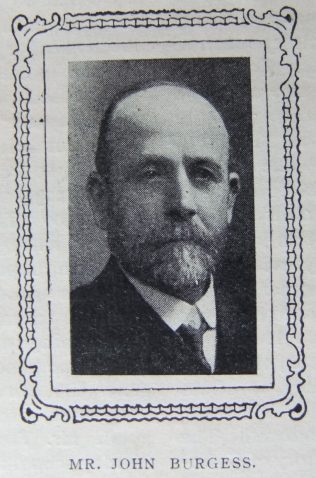 No list of successful Class leaders would be complete without the name of Mr. John Burgess, of Fountain Road Church, Hull Second Circuit. He was born at Garton-on-the Wolds, near Driffield, and is still able to use with great effect the speech of his native district. Converted when twelve years of age, he joined the church, but received his first class ticket in 1864, being then thirteen. After spending eight years in farm service and three among the ironworkers of Cleveland, he came to Hull and entered the service of the North Eastern Railway Company. It was not long before his duties necessitated his removal to Cottingham, where he spent thirteen very happy and useful years. In this village he became a Class leader, an empty book being given to him. With the blessing of God a class was formed which greatly prospered, becoming the largest in the Society. Returning to Hull, he attended the Mission which preceded the present Fountain Road Church and School, and is one of three now associated with us who attended the meeting at which the school was formed. Here also, his class, from the smallest beginnings, has become – with the exception of the flourishing Christian Endeavour Society – the largest and best attended.

Our brother, though, is equally successful as a local preacher and Sunday school worker. He has a bright, breezy, magnetic personality, and reveals amazing energy. His speech is like a torrent and abounds in racy touches and humorous flashes. He has a gift of telling a story such as few possess. He looks well after his flock and most faithfully visits the sick. He is beloved by the Church. His honoured wife supports him in all good works.

John started work as a farm servant, but by the time of the 1881 census he was a railway signalman at Cottingham.