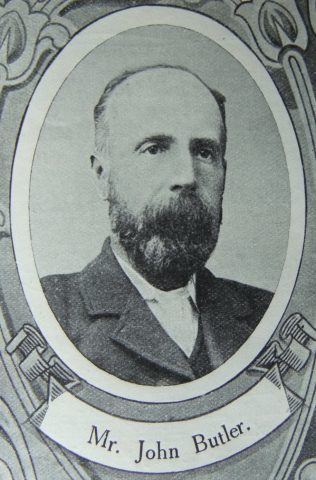 Mr. Butler has been the Steward of Scotter Circuit for 27 years. He faithfully discharges his duties, and enjoys the confidence of every member and official of the station. A loyal Primitive Methodist, a most devoted disciple of Christ, no interests are so dear to him as the advancement of the Kingdom. His dynamic in the great service is fervent love of our Master. He gets through an enormous amount of work with few words. In his work there are emitted no sparks. The power is switched on, and though no noise is heard, there is seen a great light. He is probably a perfect Christian – never offending even in a word. Like Osiris, he has gone forth to conquer the world, not with chariots and horses, but with music. Never vaunting himself, never seeking his own, bearing all things, believing all things, hoping all things, to-day he inherits all things. No man in North Lincolnshire is more revered.

John was born in late 1850 at Luddington, nr Garthorpe, Lincolnshire, to parents John and Jane. John, senior, was a cordwainer (1851) and later a grocer.

At the turn of the 20th Century the family introduced a new variety of potato into the country from the United States.  Since there had been a change of monarch on the throne they called it the ‘King Edward’.

Follow this link to see John riding ‘The Committee Wagon‘.

John Butler of Scotter (866 KB Adobe Acrobat document, opens in a new window)
Transcription of a sketch in the Christian Messenger 1904.