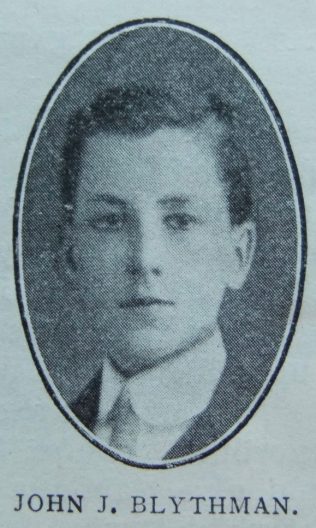 JOHN JOSEPH BLYTHMAN was born at Toft Hill, May 22nd, 1895, and died January 14th, 1913, at South Shields. The termination of this young life of eighteen years was very sad and tragic. He went out to his employment in the early morning at Harton Colliery, and about 9 o’clock was accidentally caught between the buffers of some coal trucks and killed. It was a sad blow to his parents and family, and widespread sympathy for them was expressed.

Joseph was of a very quiet and gentle disposition, and by his excellent character had won a warm place in the esteem of his workmates as well as the members of the church. From infancy he received a good religious training, to which he was finely responsive, and was developing a splendid Christian character, which gave promise of much usefulness in the church. Alas! it was not to be. From childhood he was a scholar in our Sunday School at Lord Nelson Street, Tyne Dock.

Last November, in a mission conducted by Mr. J.B. Bayliffe, he fully surrendered his life to God. It was a joy to the church leaders and his parents alike that his name was to be placed on the church roll. His name is in the Lamb’s Book of Life in the Church Triumphant. He has left a fragrant memory, which has influenced other young people for a better Christian life.

At the funeral service the Glebe Church was filled with sympathetic friends and workmates. The Revs. G. Armstrong, F. Hobson, and W. R. Hetherington took part in the service. The interment took place at Harton Cemetery.

The 1911 census identifies John as an apprentice blacksmith.