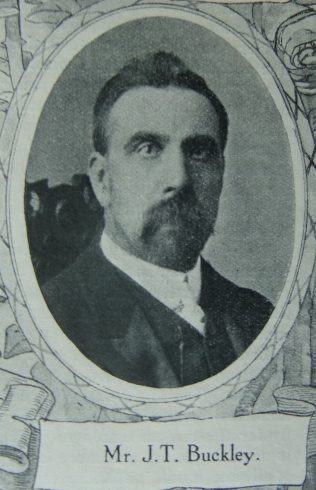 The personality and work of our Circuit Steward throw illumination upon the possibilities of the office itself when adequately filled. Both the Circuit and our brother are fortunate; the Circuit being well served, and himself in finding just the outlet for his fine business abilities and energies. Kidderminster Circuit is receiving the benefit of Mr. Buckley’s services while in the fullness of his powers, after many years of service in a number of capacities in the Lichfield, Banbury, Birmingham II, Walsall and Worcester Circuits. Mr. Buckley is a circuit, as distinguished from the mere society man, with influence which is felt everywhere. But even this does not limit his interests, as the West Midland District, in which he is so well known and where he has received striking tokens of confidence, will readily testify. In all he receives invaluable support in the broad sympathies and untiring devotion of his wife.

John was born in 1863 at Walsall, Staffordshire, to parents Andrew and Selina. Andrew was a coal miner.

John began work as a coal miner, but by the time of the 1901 census he had become an insurance superintendent.

John died in the spring of 1954 at Birmingham, Warwickshire.