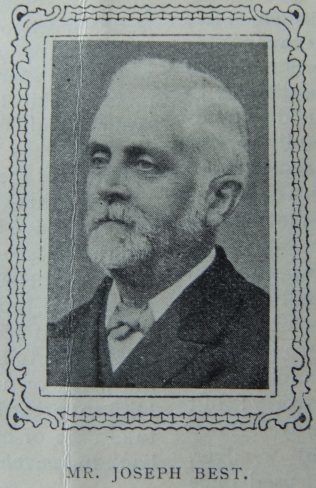 MR. JOSEPH BEST is a child of the manse, his father having been one of the early preachers of the Brinkworth and Bristol Districts, where his memory is lovingly cherished by the older members of our church. His eldest sister is the wife of the Rev. W. Hunt, President of the United Methodist Church of Australia and two other sisters are wives of ministers of our church in England; whilst his brother, the late Rev. J.H. Best, has written his name in imperishable characters in Plymouth Primitive Methodism. Belonging to such a family, when he reached manhood, he was twice called to the work of the ministry, but his inclination drew him to commerce, and he entered upon a commercial career. His responsible position as manager of a large wholesale and retail provision stores brings him into relation with “all sorts and conditions of men,” by all of whom his unflinching integrity is clearly understood. During a long business life his chief characteristics have been solidity of character, cheerfulness of disposition, and conscientious attention to details.

From his boyhood he has been a member of our church. While many have yielded to pressure and joined other communities, he has been loyal to the core, and rendered yeoman service, filling the offices of Local preacher, Society and Circuit Steward, Treasurer of the Trust, besides being a trustee of all the Circuit properties. His position as Class-leader of Queen’s Road Church is of long continuance. For nearly thirty years he has musically trained the Sunday school children, and their proficiency has gained the commendation of the best local musical experts.

In all his good works he has been ably supported by Mrs. Best and family.

Joseph was born in 1848 at St. Ives, Cornwall, to parents Joseph Best and Anna Maria Humphries. He was baptized in the Primitive Methodist Church on 16 April 1848.

Joseph died on 8 May 1927 at Watford, Hertfordshire.