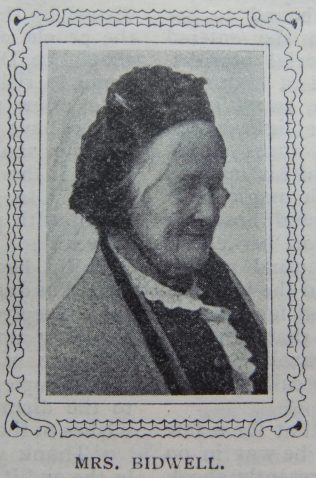 Mrs. A Bidwell is fittingly described as a grand old woman, loyal and true to Primitive Methodism. She has been a member and missionary collector 69 years, an official 55 years, having succeeded her deceased husband as Society Steward, the duties of which office she has efficiently performed (never forgetting the collection). For many years preaching services were held in her cottage at Wootton, those were years of persecution, trials, and victories, during which she was true to principle and gladly suffered for Christ’s sake. It is her joy to tell that she and her husband had the honour of entertaining “HUGH BOURNE,” and with dignified manner to conduct strangers to the “prophet’s chamber,” where the grand old man slept. For our chapel, built in 1858, she toiled and collected, wholeheartedly giving of her best to God and His temple.

For courage, consistency, persistency, un-wearying devotion to God’s service – love for the Connexion and attachment to its ministry, she has few superiors. Her material resources have ever been limited, but her gifts many, her heart large, motives pure and “eye single.” Hence she has won a place among “the immortals,” and holds high rank in the esteem of many friends in the Witney Circuit, who delight to brighten her declining years. Mrs Bidwell is now over 90 years old, her footsteps falter, but her heart is young, and her hope radiant with the light of ageless life. She still constantly attends the means of grace, holds on lovingly to the positions of Steward, Chapel-keeper, &c., and when by reason of age and infirmity our sister gives these services into other hands it will be with tearful eyes and sorrowful heart, for she esteems work for God in Primitive Methodism as her chief joy. If she has not done as much as she desired, all has been done for the glory of God.

The subject of this sketch was probably Mary Ann Thompson, born about 1818 at Hensington, Woodstock, Oxfordshire.

Mary Ann died in the spring of 1912 at Wootton, Oxfordshire.