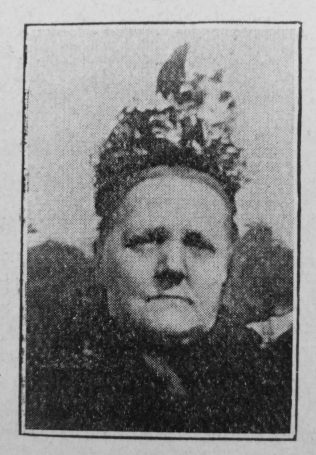 After an unbroken membership of nearly fifty years, Mary, the devoted wife of Mr. Edward Birch of Mardol, Shrewsbury, and sister-in-law of the late Rev. Elijah Cooper has fallen asleep in Jesus. She was born on July 1st, 1836. Her parents, Mr. and Mrs. Davies were interested adherents of our Church.

From her earliest years Mrs. Birch was closely connected with Castle Court Church and Sabbath School. In course of time she became a successful collector for our Home and Foreign Mission Funds. She also was a devoted Sunday School teacher, and was deeply interested in the moral and spiritual welfare of her scholars. About the year 1855 she experienced a change of heart, and became soundly converted. At once she united with the people of God, and became a useful member of the Church. She was devotedly attached to the class-meeting and was a regular attendant She valued it as being helpful to a growth in grace, and a fuller knowledge of divine things.

In the year 1873 she was married to Mr. Edward Birch, who along with his bereaved son and motherless daughter mourns her irreparable loss. After marriage she remained as a Sunday School teacher, and as far as her domestic duties would allow, she strove to be present with her class. In other branches of sacred toil, and in the various activities of the Church, she was one of the most willing workers and most liberal supporters.

During the last eleven years she was heavily afflicted and deprived of the pleasure of attending the House of God. I have visited her frequently during the last twelve months of her trying illness, and always found her cheerful and trusting in the unfailing promises of a covenant-keeping Jehovah. She took a deep interest in wider Primitive Methodism. She loved its varied institutions, and was well-read in our Connexional literature. She, along with her husband, was most hospitable, and was delighted in entertaining the servants of the Lord. While she was a loyal daughter of Primitive Methodism, she also was a consistent Christian. In the spring of 1904 she underwent a painful operation, which it was hoped would prolong her life for some years to come. About the beginning of the following September there was a sudden change for the worse, which proved to be the beginning of the end, and gradually she became weaker. On the morning of Friday, September 30th, as gently as the child goes to sleep, she breathed her last, and her redeemed spirit peacefully passed through the valley of the shadow to the bright home beyond. On Monday, October 3rd, in the presence of a large number of bereaved relatives and sympathetic friends her mortal remains were laid to rest in the Shrewsbury Cemetery. The solemn service was conducted by the Rev. Albert A. Birchenough who was assisted by the Rev. F. Morgan Ridge.

On the subsequent Sabbath evening an impressive In Memoriam service was held at Castle Court Church, when the Rev. A.A. Birchenough bore testimony to the beauty of her spiritual life and the fragrance of her high moral character. Suitable hymns were sung and the choir feelingly rendered “Vital Spark.” The “Dead March in Saul” was played, Mr. W.H. Carless presiding at the organ. Mr. Birch and family have been the recipients of a great number of letters of condolence from former ministers of the Shrewsbury Circuit testifying to her high-toned spirituality and general usefulness in the Church of her early choice.

Mary was baptised on 17 July 1836 at St. Chad’s, Shrewsbury, Shropshire. Her parents were Joseph, a shoemaker, and Elizabeth.