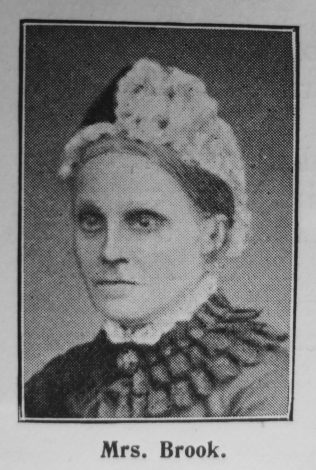 Transcription of Obituary In the Primitive Methodist Magazine by Richard Brook

Minister, of industrious, hard-working parents, Joseph and Hannah Peel, Mary, their youngest child, the child of their somewhat advanced life, was somewhat delicately reared, and received the principal part of her education at the village church school of Hightown and Littletown, supplemented by special instructions at the vicarage by a maiden sister of the vicar and founder of the church of Liversedge, the late Rev. Hammond Robertson.

Her earliest religious ideas and impressions would be received and made by the teachings and ministrations of the Moravian Sunday School and ministry, which she attended at Little Gomersal, her parents nominally and formally evincing preference for the same, of which church and services she always spoke with highest appreciation all through life.

Early in the year 1840, a miner, his wife and some daughters, residing outside the village and connected with a small Primitive Methodist Society at Little Gomersal, then connected with the Huddersfield Circuit, either by request or voluntarily visited a bed-ridden, paralytic old man; and in connection with these visits, established prayer meetings and preaching services, thus becoming the germ of the Primitive Methodist Church in Littletown, and becoming incorporated with the Huddersfield Circuit as a place on the plan, the services being held in the old man’s cottage.

These services arrested the attention of the villagers, created an amount of religious excitement, and attracted a number of young people to then. The Word took effect, religious interest was created, a society was formed, and enrolled among its first members was the name of Mary Peel, then in the fourteenth year of her age. Her religious preference having been fixed and expressed, she began to regularly attend the services of the church whose instrumentality had led her to religious decision. The character of her religious life showed itself in her consciencious attendance of the means of grace, notably the Methodist class meeting, high appreciation of the ministry of the Word, and devout bearing under the same. Discreet deportment in her intercourse with the world, unfaltering attachment to, and support of her own religious home —while no bigot, she was no religious gad — her own place having first place in her heart and claim of her conscience won the support of her presence.

In August, 1855, she became united in marriage with him who now laments her removal, though he “sorrows not as those who have no hopes concerning those who sleep in Jesus.” Appropriating Christian truth prospects bound the vision, which brighten the outlook and sooth the sorrows of such otherwise saddening circumstances. Her married life was one of devotion to the interests of her husband and family. A hard-working, economical housekeeper, an affectionate and watchful mother of her children, a spiritual-minded member of society, a worker in the church according to demands and opportunity, visiting, collecting for missions and chapels, work in connection with bazaars and sewing meetings.

In 1885, her husband’s health failing, necessitated superannuation, and they set down at Barnsley, where they were stationed at the time. In September, 1886, her husband being invited by the Sheffield Second Circuit to take the position of an engaged superannuate, they removed to Meadow Hall, where they remained over three years and eight months, where and during which period whatsoever her hand found to do, she entered cheerfully and heartily into. While here, in 1890, her husband, finding himself unable to render the amount of service required at the March Quarterly Meeting, gave a quarter’s notice of resignation of his position; and in the first week of June, having a married daughter and her husband, Mr. Wm. Porter, in business at Doncaster, they removed there, where they remained to the end of her earthly pilgrimage, which closed January 22nd, 1900, in the seventy-fourth year of her age, and the sixtieth year of her church membership.

Amongst the distinctive features of character the following were salient:—

1. Religiousness. A sense of God. His reality, His all-pervading presence. His universal recognition. Appreciation of His character. Deference to His Will. Love of religious exercise. Means of grace and reading good books.

2. Tenderheartedness. Soon and deeply touched by suffering and distress in others. Bowels of love and compassion.

4. Religious activity. “Works of faith and labours of love and patience and hope,” works not forgotten by God, besprinkling her life. Her end was peace and quiet. “Blessed are the dead which lie in the Lord, they rest from their labours, and their works do follow them.”

Her father, Joseph Peel, was a blanket weaver.