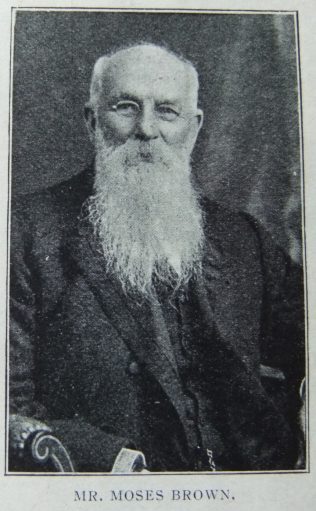 Transcription of ‘Sketch’ in the Christian Messenger by Rev. Arthur Jubb

It may he that these Centenary years will revive the glory of Camp Meetings, which have lost much of their power and popularity in most Circuits. Should that be so, many of us will rejoice. And men of the type of Mr. Moses Brown (of Hull) will be greatly in demand. He had a fine kingly presence, so that in a crowd he could be plainly seen; he possessed a trumpet-like voice, so that he could be easily heard: and his popular style of address would hold the attention of the people.

He was born at Trusthorpe, near Alford, in Lincolnshire, on March 6th, 1830, and all the influences of his childhood tended to make him a thorough Primitive Methodist. His father’s house was the home for all travelling and local preachers, though accommodation was somewhat limited, the preachers having to share their bed with the youthful Moses. In those far-off days he slept with Rev. Frederick A. Beckerlegge, the eccentric, powerful preacher whose memory is still cherished in those parts; with John Stamp, who swept like a flame of fire through North Lincolnshire and with John North, John Coulson, the Kendals, and others. As these men talked around the fireside, the boy eagerly listened,  and received impressions that were never effaced.

As soon as he was able to work he took his father’s trade of wheelwright and joiner, and at fifteen years of age removed to Grimsby. When nineteen he married, and at twenty-two years of age was soundly converted to God. Immediately he consecrated himself to the work of a preacher, taking part in cottage meetings, and showing special aptitudes for open-air work. In about two years he was on out full plan, and his love for preaching steadily flamed into a passion for the work. It is significant that one Saturday, the Rev. Frederick A. Beckerlegge came to him, and after saying that he was ill, told the young local that he must preach for him at Victoria Street the next morning. The new preacher was in a tumult, especially as Mr. Beckerlegge said he would be in the pulpit with him. It is characteristic, however, both of the man and of the time, that – spite of fears – he dare not refuse the request. The experience did him good, and helped to deliver him from the fear of ministers which so often besets youthful preachers. Steadily he rose in the love and respect of our people in North Lincolnshire, being specially in request for Revival services and Camp Meetings. His fine voice – which could often be heard half a mile away – was used in the cause of the Gospel to good purpose.

One thing always gave force to his message. He knew the truth of the message he spoke. Through many a difficult experience he had learned the power and goodness of God. In those early years there was often a keen struggle for bread. For a short period he was out of work. He had for some time rented a small shop, where he worked in his spare hours, doing odd jobs for himself and others, but one day he found himself face to face with want. After breakfast he went into his little workshop, and while at work on table he suddenly realized his position. There was himself, his wife, and several children, and no food in the house and he had not a penny in the world. A cloud came over him, and strong temptation assailed him. He fastened the shop door, and knelt down by the side of his sawing-stool and poured out his soul in prayer to God. While on his knees there came to him the assurance that his prayer was heard and that God would provide. He got up and went on with his work, and the answer to his prayers came quickly. Within half-an-hour Benjamin Drury – a blacksmith and a Primitive Methodist—came, and asked the young wheelwright what he would make him a wheelbarrow for. The calculation was quickly made, and because he must have money and bread, he named twelve shillings as the lowest price. The blacksmith said he would give him fifteen shillings, and the bargain was made. An hour after, William Wright another well-known Primitive came in wanting a new wheel to his cart, and so the cloud of the morning was blotted out of the young Christian‘s sky. From that hour business prosperity came to him.

After twelve years residence in Grimsby he crossed the Humber and became a resident in Hull. His courage and Christian character gave him a foothold in the business world. He became a contractor, building the piers at New Holland (from which the passenger boats leave for Hull) and doing much other work in connection with docks and public buildings. It speaks well for his conscientiousness and trustworthiness that after he retired from business, he was repeatedly urged by persons and companies (whose work he did by contract) to tender for important works. Throughout the years he rendered splendid service to our Great Thornton Street Church. He was for ten years school superintendent, for many years class leader, treasurer of the church, and circuit steward. When in business as a contractor he gave largely to the cause, and proved a real helper in many a difficult case. Ministers who knew his power and his generosity were not slow to avail themselves of his services.

Two of the most effective Camp Meeting sermons I ever heard were preached by him. One on ” Seek ye me and ye shall live ” was a remarkable utterance. Clear in outline, delivered with unction, and going to the very roots of religion, it made a deep impression. At the Hull Camp meetings of 1906, he took as his text the first three verses of Psalm 40. As he spoke of being” lifted out of the horrible pit,” wonderful power attended his words. Men and women laughed and wept and shouted as the preacher portrayed the experience, and when, to their astonishment, his time had gone before half his sermon was ?nished, the camp ground rang with shouts of “Go on! Go on!” And for another fifteen minutes his voice rang out the glorious theme of salvation by grace. He had grown white in the service of the church and hoped to be a Deed Poll member of our Conference But on July 6th, 1908, Gods call came, and he was translated to the higher realm of service. May God raise up many men of his type in this twentieth century.

Moses was baptised on 16 May 1830 at Trusthorpe, Lincolnshire. His parents were Edman and Elizabeth.

Moses died in his home in Gladstone Street, Kingston-on-Hull, Yorkshire.