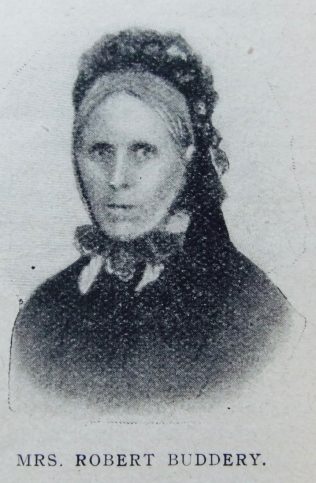 One of most familiar names in Great Yarmouth, and one of the most respected, is that of Mrs. Buddery, especially to the older generation. She had long served the Church in labours more abundant, when the Master called her home. Like so many town and city workers, she came into Yarmouth from one of the distant villages. Ah! those villages; what a fine water-shed they have been to town and city Churches. Out of them there have flowed streams of Christian workers to enrich and strengthen the larger river of Church life in the crowded centres of population. Pity that any such little stream should run dry.

Hickling was one of those villages which seemed to be natural soil for Primitive Methodism. From the first its residents responded quickly to the earnest appeals of the early evangelists. They were like the good soil into which the good seed fell, and produced an abundant harvest. From the earliest efforts of Primitive Methodists in the village, a strong and vigorous Church has existed. The scattered village lies just on the borders of the Hickling Broad. Its residents have always been of a strong and sturdy type. They have lived a somewhat rough and independent kind of life. The Broad and its surroundings have helped to foster this spirit. They could fish on its waters, or shoot the wild fowl on its banks, and so gain a free and independent livelihood. Of late years efforts have been made by surrounding landowners to restrict these rights, but by none have they been more strenuously upheld than by the sturdy members of our Church in the village. At the same time, this close association with nature and solitude made them readily responsive to religious appeals, and when the appeal was earnestly and forcibly made, it swept them into the Kingdom and transformed their lives, so that Hickling Church has been long known for its vitality and vigour.

Was it not here that Rev. Thomas Phillips, of Bloomsbury, went one week-day to preach, hot from the Welsh revival. He took for his text, “O Lord, revive Thy work,” and described passionately the scenes he had just witnessed in his own land. Whilst the last hymn was being sung, he said to the minister by his side, “ Is there anyone here who would pray?” “Try them,” said the minister, and at once Mr. Phillips asked that one or two would lead in prayer after the hymn had been sung; and they did. It was easy to start them, but not so easy to stop them. Turning to the minister, Mr. Phillips said, “Why, this is the Welsh revival!” “No! no! ” calmly said the experienced minister, “it is not the Welsh revival, it is a Norfolk revival; and if you have not seen one before, I have seen many.” It was in one such revival of religion that Mrs. Buddery, then a young girl at home, found her way to Christ and became at once a worker for Christ.

In those days Christian work was a sine qua non of discipleship. No time was lost in finding something to do to extend the Kingdom. It was soon discovered that Mrs. Buddery had the gift of speech; not the masculine eloquence of Miss Buck, nor the silvery speech of Miss Wales, but the persuasive power of a gentle womanly testimony for Christ, that could be used effectively in leading others to decision. They were not days of examinations and probations, but of quick and ready service, and very soon Miss Platt, as she then was, found her way on to the plan as a local preacher, and took her share of work with a fine array of local preachers in that village. Seventeen local preachers are on its roll today, and preach they can and do.

On her marriage, she removed to Yarmouth, the headquarters of a fine evangelistic mission right across North-west Norfolk, with half a dozen travelling preachers, and a great host of able and energetic local preachers. Here she found congenial companionship in Mrs. Hill and Mrs. Duffield, both of whom were able preachers of the Word, and with them or alone she would tramp into surrounding villages to tell the old, old story of Jesus and His love. Mrs. Hill was the greater Boanerges, Mrs. Duffield possibly the most eloquent, but that quiet, calm, self-possessed testimony for Christ, that tender, pleading, persuasive appeal of hers was most effective in winning men for Christ. There was always a stately dignity about her movements, a ladylike manner of style. No one would ever think of taking any liberties with her, or of speaking flippantly in her presence. Her look would rebuke, and if necessary, her speech would wither the boldest intruder. Tall, well-built, self-possessed, refined in speech, she became effective in persuading men “to flee from the wrath to come,” and for many years continued the good work.

But perhaps her greatest work was done in another sphere. She was a most efficient class leader. She had a fine class at the Temple, and continued that work until age compelled her to relinquish her task. It was essentially woman’s work. It fitted her nature as the shoe fits the foot, or the glove the hand. Tactful, wise, suggestive, tender, she could lead a class as few women could. Her words of counsel or advice were always fitting. She knew exactly what to say to the depressed and weary member, who poured out her griefs in plaintive tones; she could speak words of comfort and encouragement; she could rebuke the careless member as easily as she could encourage the timid soul. She was a born class leader. Would to God we had more like her to-day. She took her work seriously; it was not the office, but the work that charmed her; she was a real shepherdess of the sheep. If anyone was absent, she soon knew why; if any were sick, how quickly she found her way to the home; if any were careless, how tenderly she sought them, and would not let them go, if by any means they could be saved from themselves. She was one of a fine band of women in our Church, who have been true pastors of the flock.

Even when laid aside by age from actively pursuing the work she loved so well, her advice and counsel were constantly sought. Any member with the burden of anxious care, or some great pressing trouble, would find their way to the cottage where Mrs. Buddery’s eventide was calmly spent, and there in great fellowship would feel the touch of a tender hand, and the fine inspiration of a saintly soul. No one ever questioned her goodness, and rarely did anyone ever question the soundness or the sanity of her advice. She was a helper of many, as much beloved at home as she was respected abroad. Her family grew up to call her blessed, and to walk in her steps. Her husband passed away to the Homeland some years before her, but the eventide of her life was delightfully calm and peaceful, surrounded by all her family, who had grown up in association with the Temple Church. She took a deep interest in all its affairs. Her love for the sanctuary deepened with the lapse of years; no doubt clouded the brightness of her Christian life. She was a mother in Israel to the younger members of the Church. How proud she was of her stalwart sons and devoted daughter, one superintendent of the Sunday school, another the stately seat steward on the Temple Gallery – for was he not mace bearer to the Corporation, and piloted hearers to their seats as he would the Mayor to his chair on the civic bench – whilst the daughter was the energetic secretary of Temple Poor Fund. But they have all passed away; only one son remains to bear the name, and carry on the traditions of a long life finely lived in the service of her Lord and Master. They have all gone to the Homeland: Mrs. Hill, Mrs. Duffield, Mrs. Buddery, and no lady’s name figures on the plan to take the place of these devoted souls. They cared little about “women’s rights,” but they freely used their opportunities to render splendid womanly service, and their record is on high.

Louisa married Robert Martins Buddery (1820-1878) on 30 July 1844 at Filby, Norfolk. Robert was a cow keeper. By 1871 he had become a general carrier. Directories dated after his death indicate that Louisa continued to have a cart for hire.