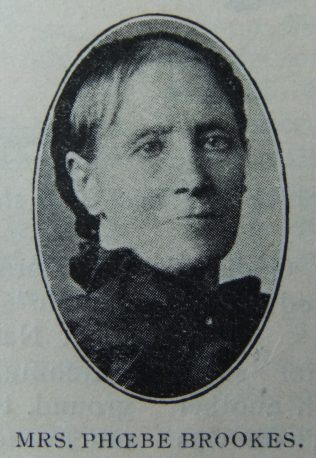 Phoebe Brookes joined Dunton Bassett Primitive Methodist Church sixty years ago, when a girl of seventeen. At that time she lived at Ashby Magna, two miles away. She married Mr. William Brookes of Dunton Bassett, also an ardent Primitive, who predeceased her in 1895. Soon after their marriage he unfortunately was seized with an illness which rendered him practically an invalid for the rest of his life. His wife boldly took his place as breadwinner, and went day after day to work—washing, nursing, etc. Despite her arduous work, she always was to be found in the week evening service and class meeting.

She was a missionary enthusiast. For fifty years and more she collected for the Home Missions. The amount must be considerable. The last time the box was opened the late Rev. J. Parkin jocularly remarked she was getting better and better as years went by. It was characteristic of her that a short time before she died she left the box to the care of her grand-daughters. She was a loyal Primitive and gloried in being one. In the village she was highly respected. In times of sickness and sorrow “Phoebe” was the one to be sent for by the villagers. She was a most consistent soul. She knew the joy of service.

As her physical disabilities increased, her faith and trust in her Master abounded more and more. Her closing days were days of pain and suffering, yet she remained faithful, “His child.”

Phoebe was baptised on 1 June 1832 at Ashby Magna, Leicestershire. Her parents were Thomas and Ann Gamble.

When able to work, William was a frame-work knitter.

Phoebe married William Brookes (abt1833-1895) in the spring of 1852 in the Lutterworth Registration District, Leicestershire. Census returns identify three children.