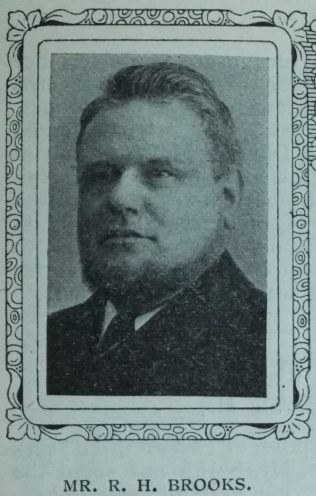 Mr. R.H. Brooks, Central Hall Mission, Bradford I Circuit is the son of local preachers, and the child of village Methodism. For the long period of seventy years his mother occupied a place on the preachers’ plan, and until age and infirmity prevailed, ministered the word of life to the people. The father for forty years was a student and preacher of the “old, old story.” The sons of such parents could scarcely be other than preachers, and so it is. One of the sons occupies a distinguished place in the ranks of the Congregational ministry, and the other a high place amongst the local preachers of the Primitive Methodist ministry. To hear Mr. Brooks speak of his parents, their piety, their prayers, and their struggles is an inspiration and a revelation as well. An incident that happened in the home life is of interest now we have reached the Centenary of the Connexion. On land farmed by Mr. Brooks’ father, the Horncastle Circuit held a Jubilee Camp Meeting; the estate belonged to a clergyman of the Anglican Church who, on hearing what had taken place, ordered the old folk to quit their home and farm.

Born at Salmonley, Lincolnshire, our friend was on the preachers’ plan when a youth, but even then he had grown familiar with village pulpits, having accompanied his parents to their appointments, giving out the hymns and reading the lessons.

Removing to Bradford thirty-five years ago, he joined our Manchester Road Society, now the Central Hall Mission, and was soon in active service. During the last thirty years he has been school superintendent, and has held nearly every other office the Church has to offer. As a preacher his services for forty-two years have been on constant request, and few men could be more frequently “away from home” than he, but his place is at the mission, along with his devoted and gifted wife, unitedly and joyously and vigorously serving their Master. Both are genuinely consecrated to God and the Church, and our prayer is they may both be spared for many years to battle for the Lord.

Robert was born in 1843 at Salmonby, Lincolnshire, to parents Michael and Elizabeth. Michael worked the land.

Census returns give the following occupations for Robert.

Robert married Jane Stubbs (abt1836-1898) in the spring of 1867 in the Horncastle Registration District, Lincolnshire. Census returns identify one child.