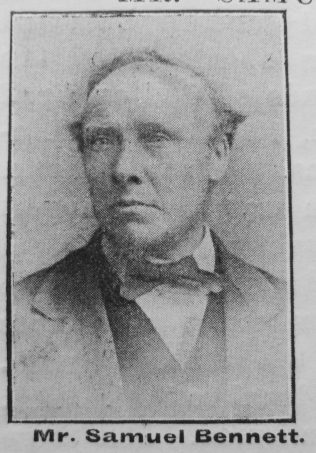 Transcription of Obituary in the Primitive Methodist Magazine by G.H.

Mr. Samuel Bennett died at Coalville, March 19th, 1903, aged sixty-nine years. He was born at Walkden, Lancashire, but as a young man removed to Leicester, entering the locomotive department of the Midland Railway which company he faithfully served for forty-five years, retiring from work about fourteen months before his death. He came of a staunch Primitive Methodist family, and became a member of the Society at Walkden, when about nineteen years of age. Upon his removal to Leicester he joined the George Street Society, but afterwards the one at Curzon Street, where he diligently laboured as a teacher, and afterwards as a superintendent in the Sunday school, and also as a class leader. In 1874 he removed to Coalville, and there also became an active and vigorous worker, being at one time the superintendent of the Sunday school and the rest of the time a devoted teacher and also treasurer, holding the last two offices up to the time of his death. He was appointed a trustee for the new church recently erected, and laid a stone in it in memory of his departed wife, and was very enthusiastic in everything pertaining to the welfare of the new building. He has not lived, however to see its completion, having been suddenly called to the higher service in the heavenly temple. About half-past eight on Thursday evening, March 19th, 1903, he had an attack of apoplexy, and by half-past nine he had breathed his last. He was a good man, full of faith, and of a very generous nature. The children greatly loved him, as he always greeted them with a smile. He lived a conscientious, God-fearing life, and was found ready when the call came. The Society has lost in him a devoted worker and a liberal supporter, his fellow-townsmen a bright example of godliness and integrity, and his two sorrowing children, Mr. J.R. Bennett and Mrs. G. Hall, wife of the Rev. G. Hall, a kind and loving father. The funeral took place on Monday afternoon, March 23rd. The body was first conveyed to the Coalville Primitive Methodist Chapel, where the deceased had been such a constant and devout worshipper, where the first part of the service was conducted by the Rev. T. Hartshorne, circuit minister, assisted by Mr. J.W. Bishell. The hymn, “How blest the righteous when he dies,” which was a favourite of the deceased’s, was feelingly sung by the choir and friends, and the “Dead March” in Saul impressively rendered by Miss Gray.

The service was attended by a great number of sympathising friends who, with the relatives, followed the body to the grave, where the Rev. T. Hartshorne concluded the service.

Samuel was baptised on 23 February 1834 at the Deane Parish Church, Lancashire. His parents, George, a coal miner, and Betty, lived at Little Hulton, nr Walkden.

Samuel married Leah Rushton (abt 1834-1902) in the spring of 1860 in the Chorlton Registration District, Lancashire. Census returns identify two children.