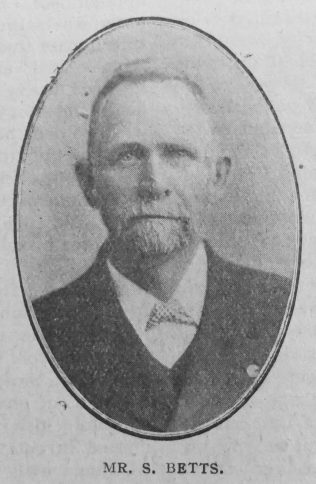 Transcription of ‘Sketch’ In the Christian Messenger by H.A Dosser

I COUNT it a real joy to write a brief sketch of my friend, Mr. Samuel Betts, because I feel that all Primitive Methodists should know of our honoured brother. Had it not been for Mr. Betts, it can be safely and surely said that there would not have been a Primitive Methodist Church in Weston-super-Mare, and yet to-day we are proud to boast of a progressive church which is really meeting the spiritual demands of a growing constituency in this lovely watering-place.

Mr. Betts came to Weston about eighteen years ago, and to his great regret found the denomination he loved so well was not represented; and being a man of vision, and having an undying love for Primitive Methodism, he determined to found a church to represent his own denomination.

He discovered a mere handful in Weston who were loyal Primitives, and by his wonderful faith and boundless enthusiasm he fired these few with a burning desire to establish a society, and in the year 1900, by the permission of our district authorities, a mission was started in a room in the Royal Arcade.

Despite the fact that numerous influential laymen of the Free Churches dogmatically declared that there was no room for another denomination in the town, Mr. Betts and his followers took courage and went forward, determined to build and extend God‘s Kingdom in the name of our Church.

After the mission had been working steadily for some time, Mr. Betts was undoubtedly divinely guided in securing the services of Mr. J. Anderton, one of our lay agents, and now one of our most promising ministers. Through the gracious and influential ministry of the Rev. J. Anderton, the mission continued to grow and develop, and newer and larger premises had to be secured.

The mission was then transferred to the Globe Assembly Rooms, in Meadow Street.

After about five years of consecrated service and toil for the Master’s Kingdom, it was felt that the mission would have to seek new and still larger premises to develop its strength, and a splendid site was secured in a district that has rapidly grown, and which gives our church ample scope for doing efficient and influential work. The church is about five minutes from the sea-front, and the passing days ever confirm the wonderful foresight that was exercised in selecting such an eligible site.

A school chapel was erected and a freehold site secured for the church. For some five years in our school chapel the labours of the Rev. J. Anderton and Mr. Betts continued to strengthen and develop, and it can be truly said that their united work exerted a mighty influence, and brought together a body of devoted church workers. One marvels at the granite like disposition of Mr. Betts in shouldering such a responsibility; but when one knows the inflexible faith of our brother in his Lord and Master, they see the secret of his wonderful achievement for his Church.

His wife gave her best to the point of sacrifice in order to assist in establishing our cause. Four daughters and one son (now serving in the R.F.C. in Italy) have been reared and developed in the daily influence of Church life, and to-day they bear the hall-mark of Christian training.

The eldest daughter was married to the Rev. J. Anderton some eight years ago. She devoted her life and energies to the Sunnyside Church in her maiden days, and her exemplary Christian character amply qualified her for the responsible position of a minister’s wife.

Our honoured friend rejoices to-day in the success of his consecrated labours, for to-day there is established a splendid church, with a most promising outlook, and a band of workers keen to carry on the good work initiated by our estimable brother.

Samuel was born in 1857 at Hanwell, Oxfordshire, to parents James an Ann. James initially worked as an agricultural labourer, but moved the family to Leeds before the 1881 census to work as an iron forge labourer.

As a teenager, Samuel also worked in the fields. When the family moved to Leeds he became an iron furnace-man. By 1891 he had become an assurance agent. Samuel worked in several Lancashire towns including Blackburn, Oldham, Burnley and Accrington. He retired to Weston-super-Mare shortly after the 1901 census.

Samuel married Emma Wilkinson (abt1857-1932) in the spring of 1882 in the Bramley Registration District, Yorkshire. Census returns identify five of six children.