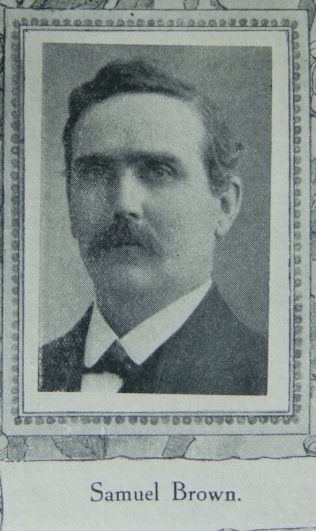 Mr. S. Brown, who is the Steward of Leicester IV., is a plant of our own growing, and had the advantage of an honourable inheritance. His father is the Society Steward of Claremont Street Church, and his mother, some years deceased, is remembered to-day for her quiet saintliness. In Leicester First Circuit, though then quite a young man, he was elected Assistant Circuit Steward, and on the division of the Circuit he was chosen Steward of his own Circuit, which office he has most usefully held for seven years. He possesses a strong personality, is a capable and prosperous business man, a thoughtful and welcome local preacher, a generous supporter of our institutions, and an ardent primitive Methodist. In all his efforts he is sympathetically supported by his wife, a daughter of the late Rev. J Wenn.

Samuel was born in 1868 at Belgrave, Leicestershire, to parents John Spencer Brown and Ann. John was a farmer.

Samuel worked as a fruit and potato merchant.