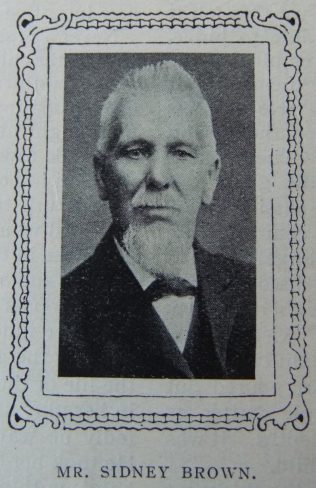 Mr. Brown was born at Draycott, Derby, 1841. In early life, he removed to Nottingham, and became associated with Canaan Street Church and Sunday school. He was converted in 1859, and soon was made a local preacher, in which capacity he laboured with much acceptance.

He became Society steward in 1874, and has held that office ever since. He has also held nearly every other official position his church and Circuit could offer him.

Some twenty years ago he was requested by the Quarterly Meeting to go to Hurst Brook and help in resuscitating our cause there. Since then, whilst retaining his connection and offices at Katherine Street, he has assiduously laboured on behalf of this church and Sunday school, and to him, and two other faithful workers there, viz., Messrs. W. Lloyd and T. Wrigley, much of the present prosperity of that church is due.

He has represented his Circuit on the District Committees and at the District Meeting, and attended, as a delegate, the last Conference at Tunstall.

He has also taken a deep interest in the Free Church Council and its work, and when no minister lived in the town he ever sought worthily to represent his church in its councils. But first and foremost he is a Primitive Methodist, and his best service has been and is given ungrudgingly for the furtherance of her purposes, and nothing gives him greater joy than to see his own church prosper.

May he be spared for some time yet to give of his ripe experience to the Church he loves to serve!

Census returns identify that Sidney worked as a cotton spinner and carder.

Sidney married Jane Elizabeth Carter (b abt1845) in late 1906 at Ashton-under-Lyne, Lancashire